Beutjer Cashes in with Contingency 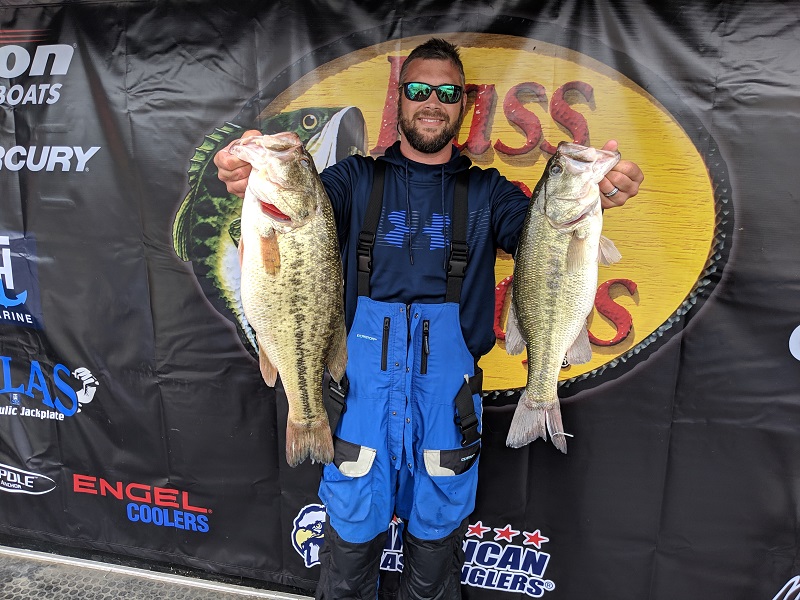 This past weekend the Alabama North Division of the Bass Pro Shops Open Series held its first event of the season launching from Goose Pond.  The water level was high and most of the lake and main river channels were stained with a good current. Will Beutjer of Athens, AL made the drive to compete for his share of the over $16,000 in prize money awarded at the tournament.  Will had a great day on the water landing a 5-fish limit that locked in the scales at 23.77-lbs. Will anchored his bag with a beautiful 7.52-lb largemouth, sealing his 4th place finish.  All though he didn’t win the tournament, he was smart enough to be signed up for several of the great contingency programs offered by our wonderful sponsors.  He is the divisions first Berkley “Cast for Cash” winner this year and credits his big fish to a Berkley Powerbait Hollow Body Swimbait in the Tennessee Shad color.  Will also runs a 2018 Triton Boats 20TrX Patriot with a Mercury 250 ProXs, and for being the highest placing Triton Boat owner and being registered with Triton Gold he qualifies for even more money.  I reached out to Will to get his take on his experience.

“Man, with all the rain we’ve had recently the water was muddied up really good and I was just looking for some clearer water to get into.  I found a spot about mid lake in around 10 foot of water that was holding fish that were staging and getting ready to move up. I used my Garmin Panoptix to see that the fish were holding at the 5-7 foot range and I started throwing a Berkley Powerbait Hollow Body Swimbait and the Berkley Square Bull 5.5 and just started whacking ‘em, thankfully I had the TH Marine G-Force Cull System with me so I was able to not accidentally cull the wrong fish” said Will.

“Later in the day the bite slowed down so I moved up to the 6-8 feet deep range with about 3 foot of grass growing on the bottom and just kept throwing the same baits, that Panoptix allowed me to see the fish and the grass and really target them efficiently.  All in all, it was a great day on the water with a great organization, I will be back to fish with the ABA again and look forward to making my mark,” concluded Will.

The next event for the Alabama North Division of the Bass Pro Shops Open Series is April 13, 2019 on lake Neely Henry.  Don’t forget to sign up and come compete for your share of the highest payouts available for the weekend angler.  It’s still not too late to get signed up for all the great contingency programs offered by our sponsors to increase your winnings.