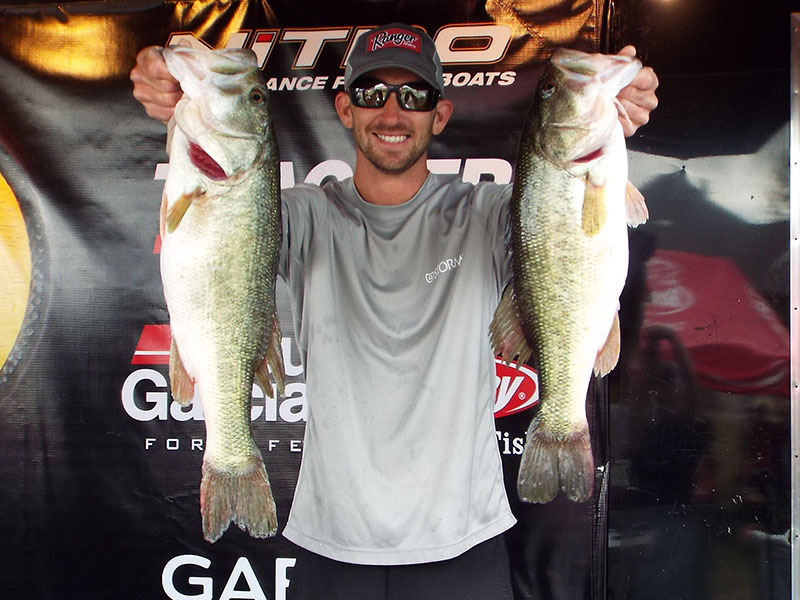 ATHENS, Ala. – Bryan D. New moved up a spot into the lead during the second day of competition in the 2019 Ray Scott Championship, held April 5 on Walter F. George Reservoir or Lake Eufaula near Eufaula, Ala.

The Belmont, N.C. boater landed his second consecutive five-fish daily tournament limit to put 51.30 pounds on the board. On the second day, he brought in 25.61 pounds to add to his nearly identical 25.69-pound catch on the first day of competition.

“I struck out completely using the same tactics that worked earlier,” New admitted. “We had to go all over the lake trying everything to find the bites we did. Luckily, I averaged out well enough to hold onto a good position going into Day 3. I’m looking forward to a better day tomorrow.”

Ryan Ingram of Phenix City, Ala. jumped three places into second place. On Day 2, he caught five bass for 23.94 pounds. He capped that catch with a 6.52-pound lunker. On the first day, Ingram put five bass in the bag for 24.69 pounds to give him a total of 48.63 pounds.

Moving up five places, Chandler A. Ray of Edsion, Ga., sits in third among the boaters on Day 1 with a total of 46.89 pounds after two days. On the second day, he brought in a limit to add 24.03 pounds to his total. A 6.90-pounder anchored the bag. On the first day, Ray caught five bass weighing 22.86 pounds.
“On Day 1, I missed the first three hours of the morning by throwing a gear on my prop,” Ray lamented. “On Day 2, I was lucky enough to fish a whole day and had all five fish by 9 a.m. I caught about 25 fish total. I mostly fished brush in the 6- to 16-foot range in the mid- to upper lake. I caught my fish on a 5-inch Fighting Frog in tilapia on a 1/2-ounce weight and a Big Bite Baits B-2 Worm in Bama Bug.”

Sitting in fourth place, Eufaula angler Scott Montgomery added his second straight five-bass limit for a two-day total of 46.63 pounds. On the first day, he held sixth place with 24.63 pounds and contributed another 22 pounds on the second day. His biggest bass weighed 6.82 pounds.

Dropping from third place to fifth in the Boater Division, Bobby Padgett of Lagrange, Ga. caught two consecutive limits going 46.55 pounds. On Day 1, he caught 24.95 pounds including a 6.16-pound kicker. On the second day, he brought in 21.60 pounds. 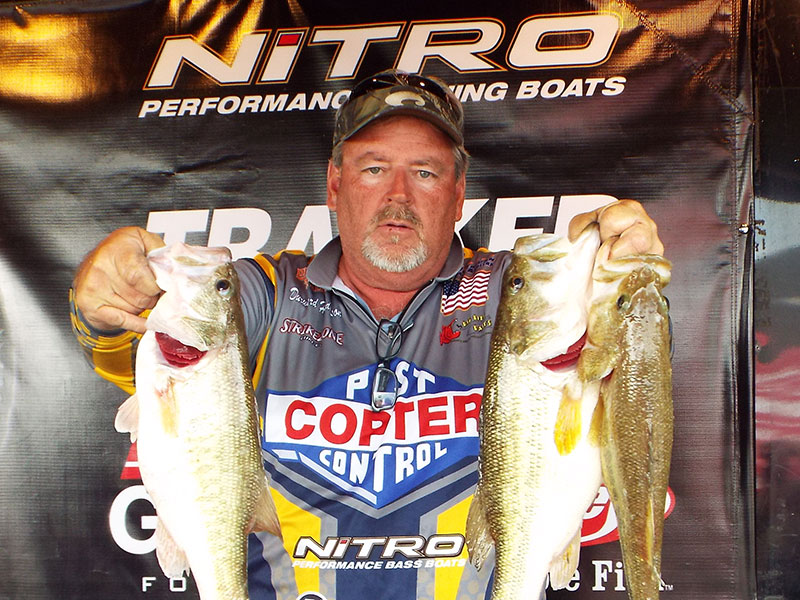 Leading the co-anglers after two intense days of competition, Durward Henderson of Titus, Ala. moved up from fourth place with a two-day limit hitting 25.11 pounds. He landed 12.87 pounds, including a 5-pounder, on the first day and added 12.24 pounds the second day.

“We fished on the north end of the lake down to the mid-lake area,” Henderson revealed. “We fished some shallow grass and some offshore. I was able to cull out a limit. The lake has been fishing really well for the past couple of years. It’s just a matter of getting the fish to cooperate with what we are doing that day.”
The Day 1 Co-Angler Division leader, Alan Barrett of Cullman, Ala., dropped a notch, catching only one fish weighing 4.16 pounds on his second day. Adding that to his 15.98-pound catch on Day 1, he holds second with 20.14 pounds. He caught a 6.94-pounder on opening day.

“We mainly fished in shallow water,” Barrett detailed. “My boater was sight-fishing for bedding fish, which made it tough on me. I only got one bite, but it was a good one. The quality fish are there. It’s a beautiful lake. The water dropped about a foot from the first day. That might have affected the fish.”

Isaac “Big Ike” Clemmons of Fitzgerald, Ga. leaped from 10th place into third with 18.83 pounds. On Day 1, he caught a three-bass daily division limit for 11.11 pounds and added 7.72 pounds on Day 2 with his second consecutive limit.

“We went to a pattern that my boater thought was going to work, but it didn’t work,” Clemmons said. “We went back to the same area after trying a couple spots that I know. All of a sudden, they started firing. We caught our fish in the mid-lake area. The water dropping affected us. It pulled the shad off the grass.”
Chris Pearson of Marthaville, La. vaulted from 74th to fourth place among the co-anglers with a big Day 2 catch weighing 12.87 pounds. That boost gave him a two-day total of 18.43 pounds. He bagged two consecutive limits with his first day sack weighing 5.56 pounds.

Rounding out the top five co-anglers, William Woods of Gray, Ga. also landed two consecutive three-fish limits for 18.29 pounds. His first day catch came in at 6.39 pounds, putting him in 62nd place. He followed that performance with a Day 2 catch going 11.90 pounds. This included a 6.83-pound kicker.

Mike Jones holds the lead in the big bass competition. The boater from Brandon, Miss. pulled in an 8.62-pound pig. Jeff P. Cox of Walker, La., still holds the lunker lead among the co-anglers with a 7.23-pounder he caught the first day.

Both boaters and co-anglers qualified by advancing through 18 divisions in the American Bass Anglers Open Series throughout the season and in nine area championships. The champion boater will receive $50,000 in cash plus a new 21TRX Triton boat equipped with a 250-horsepower Mercury Pro XS outboard motor.

The winning co-angler will receive $25,000 in cash plus a new 19TRX Triton boat powered by a 225-horsepower Mercury Pro XS outboard motor. Anglers could possibly win bonus prizes of $50,000 from Triton Boats, $1,000 from Mercury Motors, $1,000 from Garmin and $1,250 from TH Marine if they meet specific eligible criteria.

The action continues through Sunday, April 7 with the public weigh-ins scheduled to begin at 3 p.m. Central Daylight Time at Lakepoint Resort State Park (www.alapark.com/lakepoint-state-park) in Eufaula each day of the event.