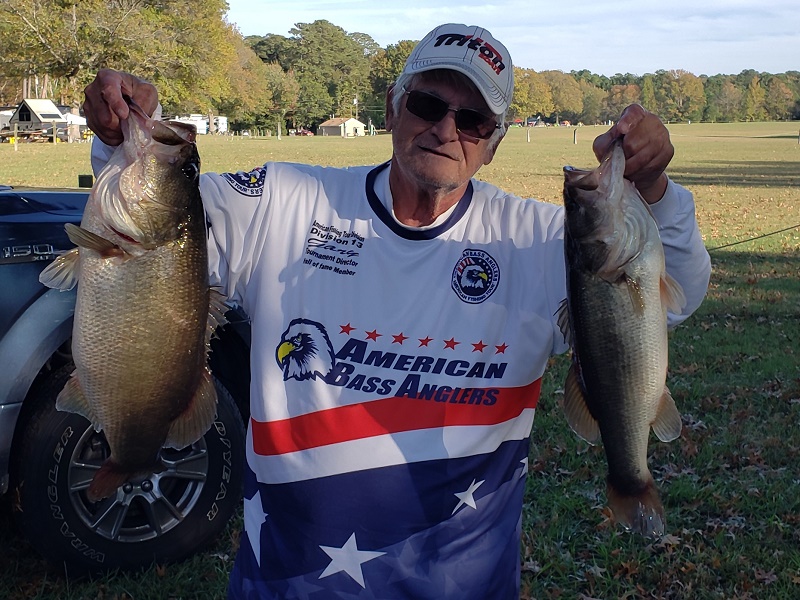 Nov 2, 2019, Williamsburg, Va. – Gary Conner of Williamsburg, VA won the Bass Pro Shops Fishing Tour Virginia division tournament presented by American Bass Anglers.  Running out of Chickahominy Riverfront Park, Gary brought back a five-fish limit that tipped the scales at 20.55 pounds anchored by an 8.42-pound kicker.  For the victory, Gary took home a check for $660 and an additional $135 in big fish money.

When asked about his pattern he said “This was the day anglers dream about having.  I had boated a couple of smaller fish on a square bill crankbait but knew those fish were not going to put me in the money.  I then picked up my Texas rig and got a couple of short hits on it, so I dyed the tail chartreuse and the game got real interesting real fast.  I was fishing the edges of grass and reeds in water about six feet deep. On four consecutive casts, I caught a 2, a 3, a 3 ½ and a 4.  I put on a new worm and cast it out only to have it stop on the fall, set the hook and we were off to the races.  After I netted the fish I simply sat in the boat for almost 5 minutes.  I was so elated I couldn’t fish for a few minutes.  5 consecutive casts produced a stringer of 20.55 pounds with the kicker everyone dreams about.  That one fish at 8.42 pounds was the biggest fish I have ever caught on the Chickahominy River. It was also the biggest fish I have ever weighed in in a tournament.  I have to thank the Virginia Department of Game and Inland Fisheries for having the foresight to restock the river almost 10 years ago.  The introduction of F1 hybrids has made all the difference in this fishery.”

Second place was claimed by Matt Funk with 5 fish that weighed in at 16.07 pounds netting him $404 in second place money.

Rounding out the money places were Kelly Robinette with 15.38 pounds and Joe Carr with 15.15 pounds.

The next tournament in this division will be back on the Chickahominy and James rivers on March 14 launching from Chickahominy Riverfront Park near Williamsburg, Virginia.

For more information on this event or division please contact local director Gary Conner at 757-293-8651 or visit www.americanbassanglers.com