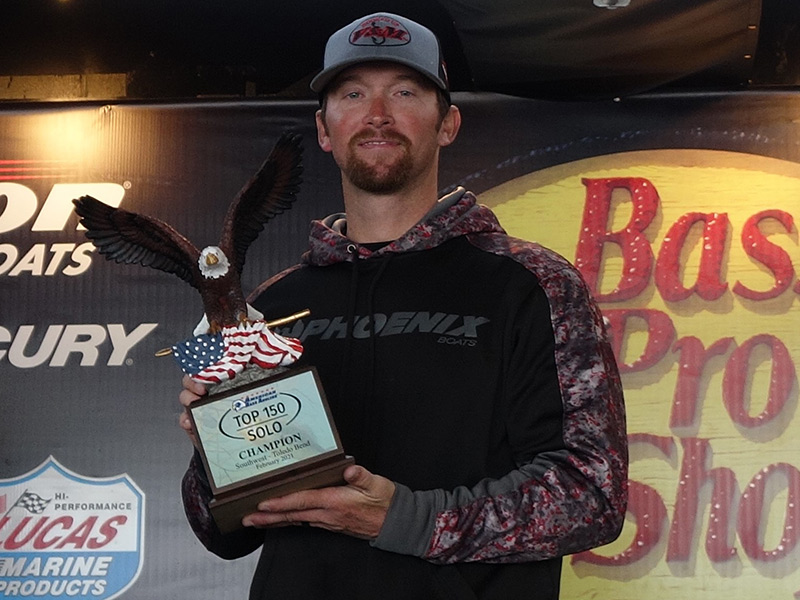 Leading by nearly four pounds on Day 1 with 27.02 pounds including a 7.15-pound lunker, Pitt added 24.47 pounds on the final day and won $13,000 for the win. His two five-bass daily tournament limits gave him a 5.15-pound average for the tournament.

“I fished the south end of the lake, concentrating on water between 20 and 30 feet deep with stumps, hard spots, and channel swings,” the new champion revealed. “I caught most of my fish on a deep-running crankbait and a football-head jig. I probably caught about 50 bass each day. I lost two bass, each about 4.5 pounds, but they really wouldn’t have helped much.” 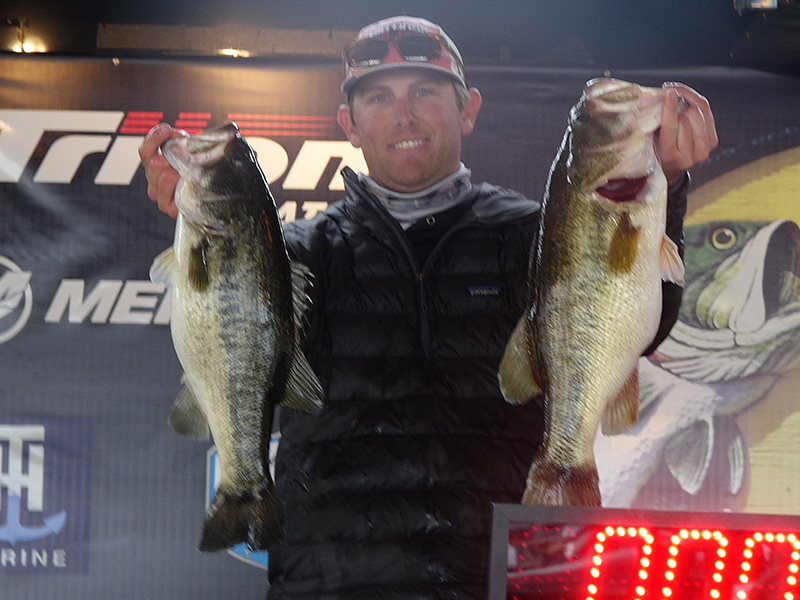 Holding second place for the entire tournament, Cameron Roane of Beaumont, Texas, tightened the gap on the second day of the event. On a stormy, cold Day 1, he caught five keepers weighing 23.16 pounds, including an 8.32-pound lunker. On the overcast second day, he landed 25.27 pounds. Roane finished with a perfect 10-bass tournament limit going 48.43 pounds. He collected $5,500 for second place.

“I fished from Six-Mile Creek to the Pendleton Bridge,” Roane advised. “I caught most of my fish on football-head jigs, but I caught my biggest bass on a Strike King 10XD crankbait. I concentrated on fishing around heavy wood cover in eight to 10 feet of water and from 20 to 25 feet of water. I only caught seven fish on the last day and lost three fish on the first day.” 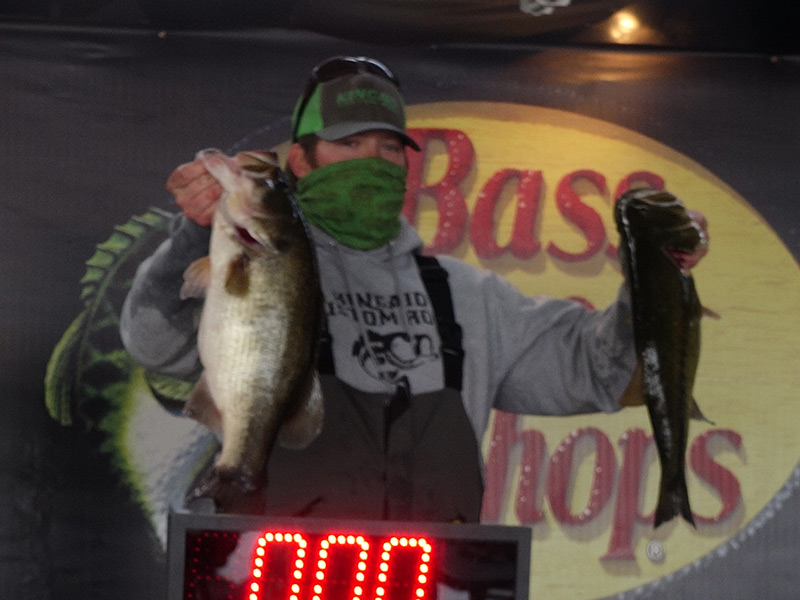 Nick W. Kincaid of Coweta, Okla. landed the largest bag on Day 2 and the second largest sack of the tournament at 26.23 pounds. He anchored that Day 2 catch with an 8.35-pound bucketmouth that helped him vault from ninth place to third. After catching 18.66 pounds on the first day, he finished with a 10-bass two-day limit weighing 44.89 pounds. He went home with a check for $4,200.

“I fished from the middle of the lake all the way down to the dam,” Kincaid explained. “I stayed fairly deep, hitting channel swings and drains. My best bait was an Yumbrella Flash Mob Junior. I caught quite a few fish both days. I’d like to thank my wife, Nicole, and all the family for their support.”

Also making a big leap on the final day, Marshall E. Hughes from Hemphill, Texas, shot up from eighth place to fourth with a two-day total of 10 bass and 42.14 pounds. He landed 19.37 pounds on Day 1 and added 22.77 on the last day. Hughes earned $2,500 as the fourth-place angler.
“I fished secondary points and heavy timber from Six-Mile Creek to Lowes Creek,” he elaborated. My best baits were a big jig, a Carolina rig, and a crankbait. I caught about 15 fish each day. l lost a couple fish and broke a couple off that might have helped.”
Moving up one place, John L. Soukup of Sapulpa, Okla. caught a 10-bass tournament limit weighing 41.20 pounds. On the first day, he held sixth place with five bass at 21.44 pounds including a 5.59-pound kicker. He landed 19.76 pounds on the final day to add $2,100 to his bank account for fifth place.

“I fished a lot of different kinds of cover like shallow rocks, brush, docks, and a lot of blown-in logs that were offshore,” Soukup detailed. “I caught all of my fish on a jerkbait. The first day was tough. I only caught eight fish, but landed more than 30 on the final day.”

He concentrated his fishing from the Cypress Bend landing area to the Pendleton Bridge. On the final day, he found enough keepers for a sack weighing 19.76 pounds.

“I only had two fish at noon, so I picked up the jerkbait and went shallow,” Soukup said. “I just ran new water on the final day. I probably should have stayed out deeper to try to get bigger fish. I want to give a shout-out to The Bass Tank and Garmin Panoptix LiveScope. Every fish I caught, I looked at it. I didn’t make a cast unless I saw that fish on LiveScope.”

Leading off the next five anglers, Miles D. McDaniel from Milam, Texas, finished in sixth place with 10 bass going 38.03 pounds. He held fifth place with 21.88 on the first day, topped by a 7.33-pound lunker. On the second day, he landed 16.15 pounds.

On Day 1, Cole B. Moore of Anacoco, La. earned himself a check for $1,000 after catching the biggest bass of the tournament, an 8.46-pound bucketmouth. That lunker helped propel him into fourth in the pack with 22.48 pounds on Day 1. On the second day, he landed a 12.19-pound sack to take eighth place with two consecutive five-bass daily limits for a total weight of 34.67 pounds.

Finishing in ninth place, Glen F. Freeman of nearby Zwolle, La. landed 10 keepers weighing a total of 33.16 pounds. He landed 15.72 pounds on the first day to hold 17th place. He upped his catch on the second day to 17.44 pounds and jumped eight places.

Capping off the Top 10, Kevin Lasyone of Dry Prong, La. finished with eight bass weighing 32.41 pounds. He held third place on Day 1 with 22.59 pounds including a 6.10-pound kicker. On the second day, he caught three bass for 9.82 pounds.

The tournament ran out of Cypress Bend Park in Many, La. The competitors averaged 17.92 pounds per person. The largest reservoir in the South, Toledo Bend covers about 185,000 acres and runs 65 miles along the old Sabine River channel, straddling the Louisiana-Texas line.

Anglers fishing the ABA Top 150 Solo Series compete in two divisions, Southwest and Southeast.     Anglers pay $600 to enter each of the three tournaments in either division and everyone fishes alone.
The Southwest Division anglers next head to nearby Lake Sam Rayburn on March 26-27. The Lake Sam Rayburn tournament will take off from Cassel Boykin Landing near Zavalla, Texas. The divisional season wraps up at Lake Eufaula, Okla. from April 30 to May 1.

From Toledo Bend, the Southwest Division anglers next fish Lake Sam Rayburn on March 26-27. The Lake Sam Rayburn tournament will take off from Cassel Boykin Landing near Zavalla, Texas. The divisional season wraps up at Lake Eufaula, Okla. from April 30 to May 1.

The Southeast Division opens Feb. 26-27 at the other Lake Eufaula, the one on the Alabama-Georgia line near the town of Eufaula, Ala. Next, that division heads to Lake Guntersville near Guntersville, Ala. on April 30-May 1. Finally, the division concludes the series for the year on June 25-26 at Lake Chickamauga, Tenn. 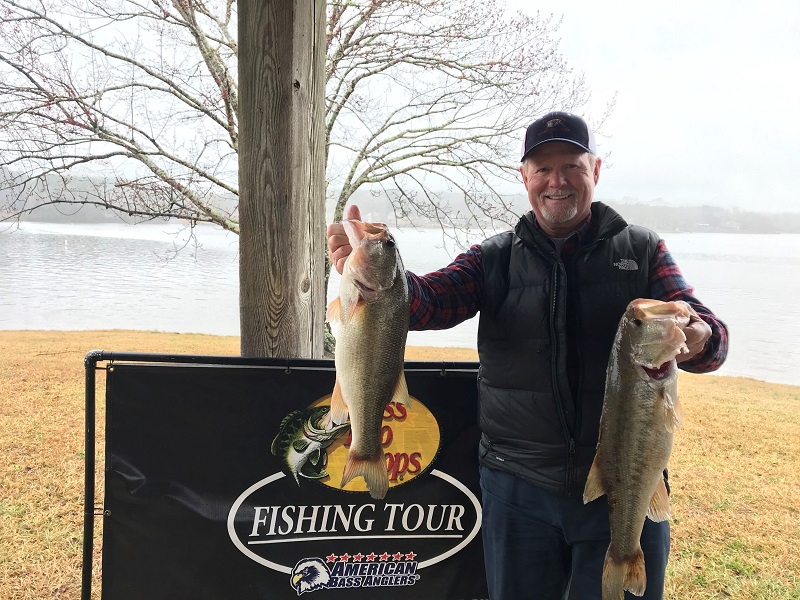 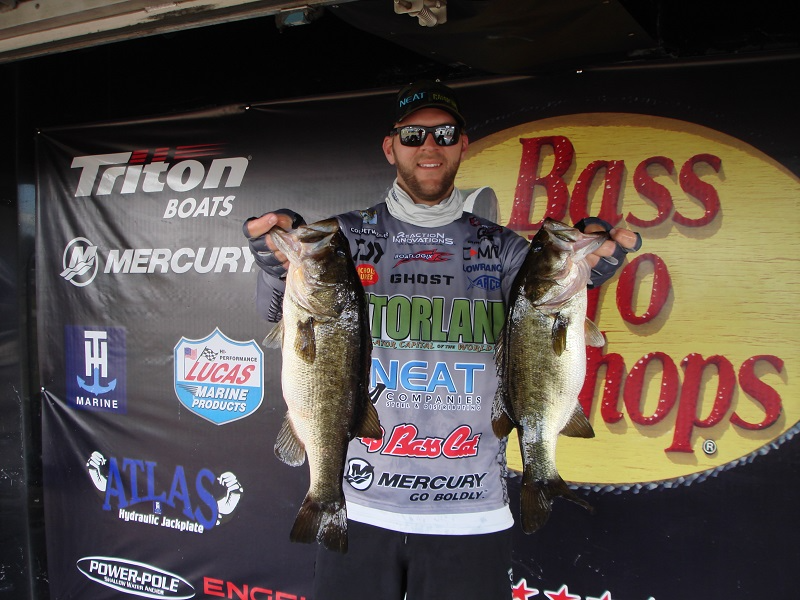