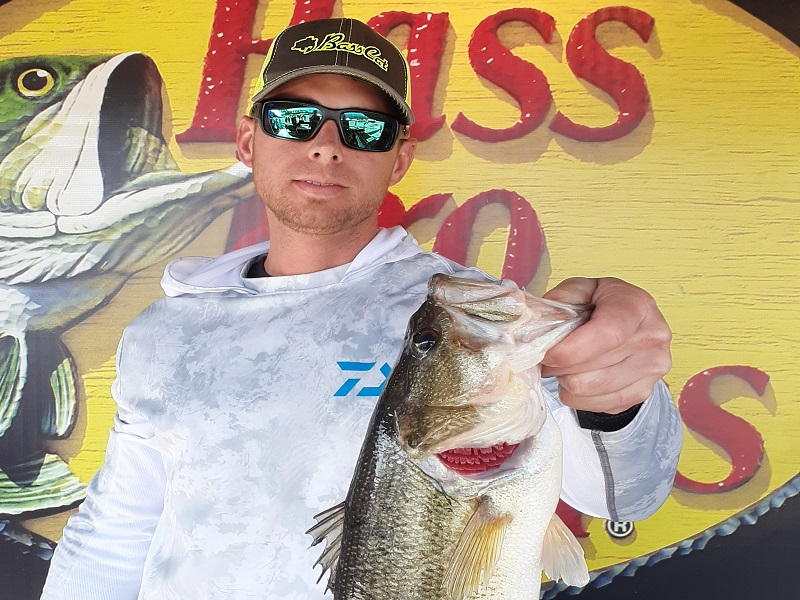 ATHENS, Al. – Shane Cade of Clinton, MS won the Bass Pro Shops Open Series Mississippi divisional opener held March 6th on Ross Barnett Reservoir.  Running out of Tommy’s Trading Post, Shane caught five-bass weighing 18.59-pounds. Some spring rains brought on dirty water conditions up-river, but due to the multi-year drawdown on Ross Barnett, the reservoir was full, and the anglers were given conditions they typically do not see.

“Well, my day definitely didn’t start off like I had hoped.  I went to my first couple spots and did not get a bump.  The first fish I put in the boat was after 11:00 this morning.  I did not have high expectations until I caught another, then another, and another, and the fish were decent size.  Before I knew it, I had a limit in the box and caught a total of 12 keepers.  I culled up a few times but lost several of them due to short strikes.  I was throwing a Tennessee color crankbait in 8-10 feet of water and.  The water had a stain to it which could have been the reason for the miss hits, but it all worked out in the end.”  Taylor said.

Larry Rochelle of Canton, MS inched out second place landed a five-bass limit going 17.47-pounds.  “Unlike Shane, my day started off good, then quickly made a turn for the worse.  I had 3 fish in the boat before 7:00 AM and kept them all day.  I was on a good school of fish and then the cable breaks on my trolling motor.  I had no steering with the foot control at all.  I had a good friend met me at the ramp with his boat and off I went for round two.  I got back to those fish around 8:30 but the bite was over.  I managed to catch 2 more fish the rest of the day to get my limit.  I was targeting isolated structure up the river and had them pinpointed, but a little too late with everything that happened.” said Larry.

Shannon Denson of Brandon, MS finished in third for the boaters right on the heels of Larry just .02 oz back, with five bass going 17.45-pounds.  “I had a few baits to run through today that were all producing fish, but the chatter bait in black/blue with a skinny dipper trailer was my go-to bait.  It has been warming up this week and shallow was my ticket, and I was targeting new coontail grass growth.  I also threw a Paca Craw and a swim jig.  The chatterbait caught the 3 larger fish, then 3 came on the Paca Craw, and one on a swim jig.”  Shannon said.

Finishing fourth was Alfred Williams of Crystal Springs, MS with 16.55 pounds and Noel Allen Jr of Brandon, MS rounded out the top five boaters with five fish at 15.84-pounds.

In the Co-Angler Division things were much more difficult.  Brian Toth of Brandon, MS won the opener earning valuable points to start off the year with a solid limit of 9.76 lbs.  “My boater and I fished on the main lake today.  The conditions were tough, so it was important to take advantage of every bite you got.  Although the sun was out it was cold and breezy.  I caught 6 keepers today and culled up once.  I stuck with my confidence baits and didn’t try changing up a lot just to entice a strike.  I was flipping Xcite Baits, Raptor Tail Craw and a spinnerbait.” McCarter said.

Taking second for the co-anglers, Maricko Roberts of Newton, MS had a limit for 8.32 lbs.  “I had a great boater today.  He was on fish in the grass beds which is something I love.  The morning started off cold but as time moved on, I managed to put a few in the boat.  I caught all my fish on a lizard and a crawfish just dragging it slow on a TX rig around all the grass.”  Said Roberts.

Placing third, Elijah Allen III of Greenville, MS landed a limit of three fish for 7.32lbs and rounding out the top five finishers was Collin Brumfield from Vicksburg MS in fourth with 6.44lbs and squeaking out fifth place was Steve Keeton of Aberdeen MS with 6.05lbs.

The next MS Division event is slated for May 22nd back on Ross Barnett out of Tommy’s Trading Post.