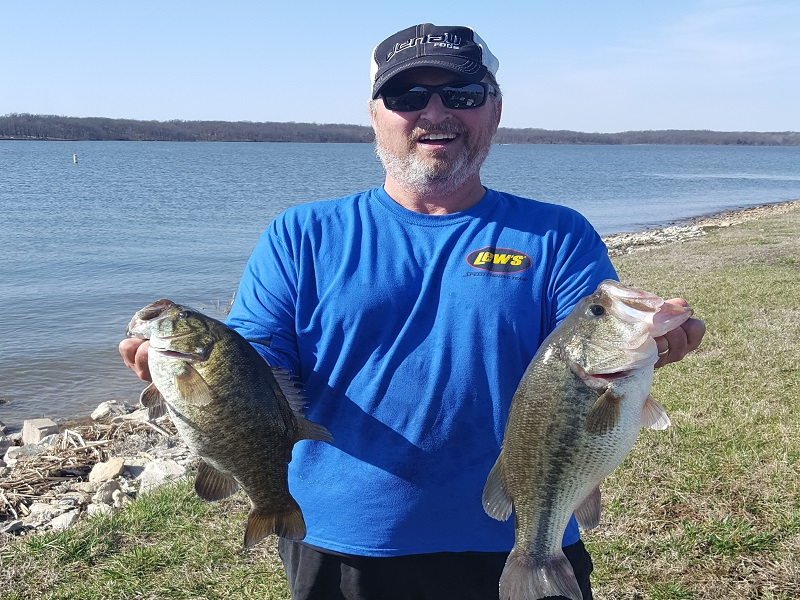 It was a chilly start for the American Bass Anglers first 2021 Division 58 tournament. Nineteen anglers launched out of Mound Valley Ramp on Big Hill Lake at 7:30 a.m.  Air temperature was in the low 30’s at launch time and warmed to almost 60˚ by 4:00 p.m. weigh-in time.. Water temperature ranged from 48-59˚. There was a southerly wind and lots of sunshine.

Fourteen anglers brought fish to the scales, including two 5-fish limits. Mark Moody of Girard, KS took 1st place with 13.31 lbs, anchored with a 5 lb largemouth that was Big Bass of the tournament. He took $677 cash for his efforts. Second place was Cherryvale angler, Kyle Kiister who weighed in 11.32 lbs. Loren Graves of Independence, Ks took 3rd with 10.60 lbs. Second Big Bass went to Terry Knuepple with a 4.38 lber.

The lake level was up about a foot and the water was stained at the dam and muddy with lots of debris in parts of the upper lake. Jerk-baits, spinnerbaits, Alabama rigs and jigs were reported to be the baits of choice. Over 91 pounds of fish were weighed and released.

D58 holds tournaments about every month on Big Hill Lake. The next tournament is scheduled for April 3, 2021.. Anglers compete for cash, prizes and points which will qualify them to fish the D58 2-day Championship scheduled for October 9-10, 2021. The ABA National Championship will be help on Kerr Lake, Virginia October 20-23, 2021..

American Bass Anglers is a National Draw Trail with almost 40 Divisions across the country. It is run in draw format. Boaters and non-boaters from age 14 are encouraged to compete. There are several divisions in this area. You can get more information about them at www.americanbassanglers.com (AFT Trail). Information about the area tournaments can also be found at www.centralmidwestbass.com web-page as well as centralmidwestbass FB page. Membership in ABA is $35/365 days; entry fee is $70. Most divisions have a Big Bass Option Pot. Call Becky with any questions: 316 644-1454.

These anglers earn valuable points toward the divisional angler of the year title. Each division's points champion will compete in the annual American Bass Anglers AFT Angler of The Year Final Round at the AFT Championship. The top 500 anglers from the various divisions will also earn the right to compete in the three-day ABA, AFT National Championship tournament.

American Fishing Tour offers low cost, close to home bass tournaments are designed for the weekend angler. All anglers fish for both money and points. The points advance the angler to their divisional championship. The top 500 anglers in the US will be invited to the American Fishing Tour National Championship this fall on Kerr Lake in Virginia.