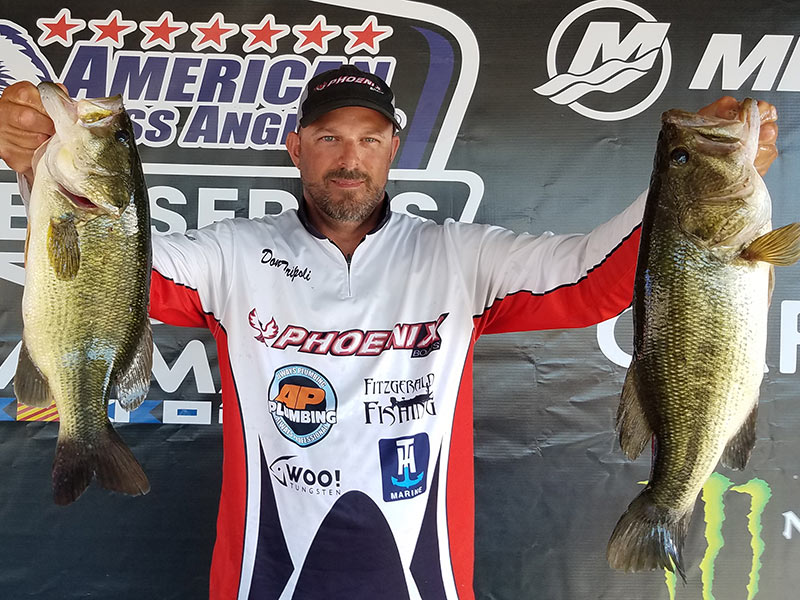 Launching at Long Point State Park in Bemus Point, N.Y. to fish the 13,000-acre lake near the town of Jamestown, the angler from Webster, N.Y., brought in a 5-bass tournament limit tallying 18.62 pounds. He anchored that bag with a 4.22-pounder to give himself an average of 3.72 pounds.

“I fished grass lines all day with a black and blue 1/2-ounce jig with a crawfish trailer,” Tripoli remarked. “I just kept going back and forth in this little section of the lake. I was just around a point from the marina and on the other side of the lake. I caught about 12 keepers.”

In second among the boaters, Noah Raymond of Lockport N.Y. also landed his 5-bass limit. He brought in 18.59 pounds topped by a 4.16-pounder. 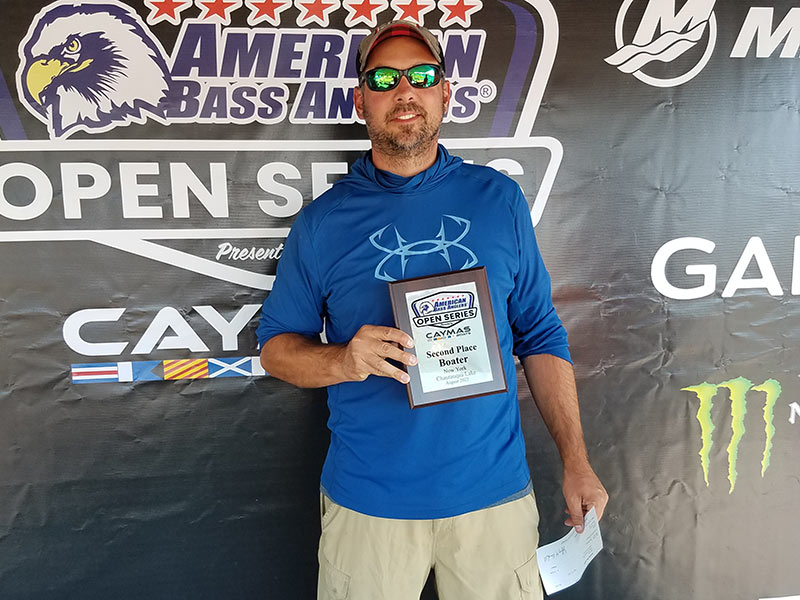 “I threw topwater poppers early in the morning and had a limit weighing about 15 pounds in 30 minutes,” Raymond revealed. “After that, I flipped the grass and threw a dark Ned rig a little bit. At the end of the day, I hit a couple of docks and caught a decent bag.”

In the third spot for the boaters, Jesse E. Jodon from Windber, Pa. found five keepers for 16.03 pounds including a 4.55-pound kicker, the second largest bass caught by a boater. 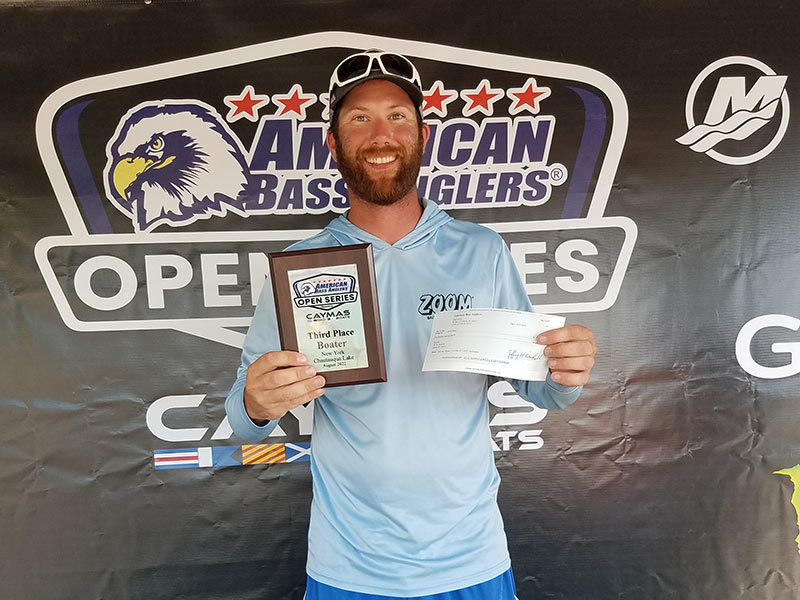 “I started really close trying to take advantage of the early morning bite,” Jodon stated. “I caught two smallmouth on a ChatterBait. Then I went north but came back later in the day. I started flipping grass and caught two 4-pounders, one on a swim jig. I caught a couple more keepers.”

In the Co-Angler Division, John M. CIavaglia of Pittsford, N.Y. led the pace with a 3-bass division limit weighing 11.83 pounds. He capped his catch with a 4.55-pounder, the third biggest bass caught by a co-angler, and tied for the third largest bass seen in the tournament. That gave him a 3.94-pound average. 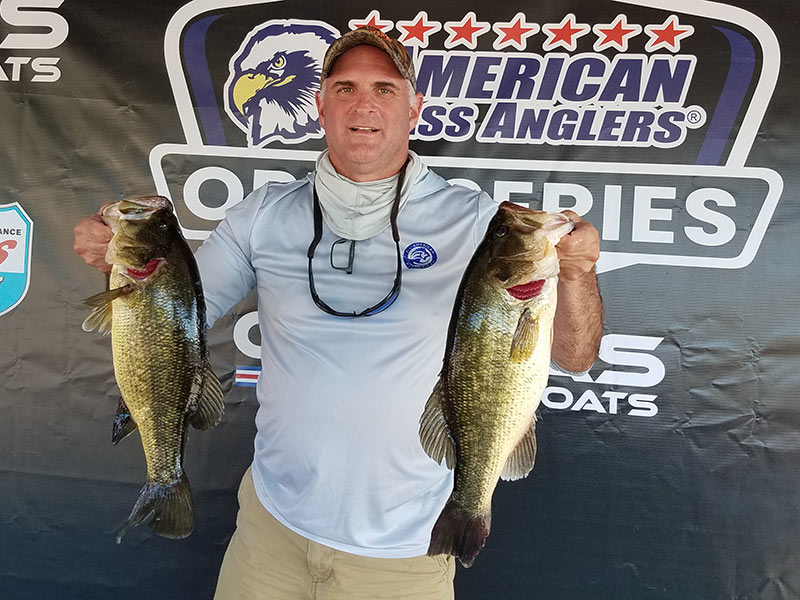 “We went a few miles down on the east side of the lake,” CIavaglia commented. “I fished a 1/4-ounce Strike King Bitsy jig tipped with a 3-inch black and blue Berkley Power Bait Chigger Bug. We were blind casting and caught all our fish by 7:30 a.m. I only caught three, but that was enough. I caught the right ones.”

In second for the co-anglers, Mark “Buzz” A. Marini from New Holland, Pa. brought in three good keepers for 11.49 pounds. He topped that sack with 4.62-pounder, the second largest bass caught in the division.

“I was using a magic craw on a jig, working it slowly around the grass clumps,” Marini said. “I caught nine keepers.”

“I caught my fish on top early in the morning,” Pruitt said. “I was throwing a white Whopper Plopper. I only got four bites all day, but brought in a limit.”

Scott D. Lafaver from Auburn, N.Y. finished sixth among the co-anglers with three bass and 8.20 pounds. However, one of them weighed 4.70 pounds, the biggest caught by a co-angler and the second largest bass of the tournament.

The division will conclude its season by fishing a 2-day area championship tournament, slated for Sept. 24-25, 2022, at Oneida Lake. That tournament will run out of Oneida Shores Park, located at 9400 Bartell Road in Brewerton, N.Y. To register for the 2-day tournament, CLICK HERE .

For more information about this tournament, call Tournament Director Jeff Randall at (256) 777-6152. 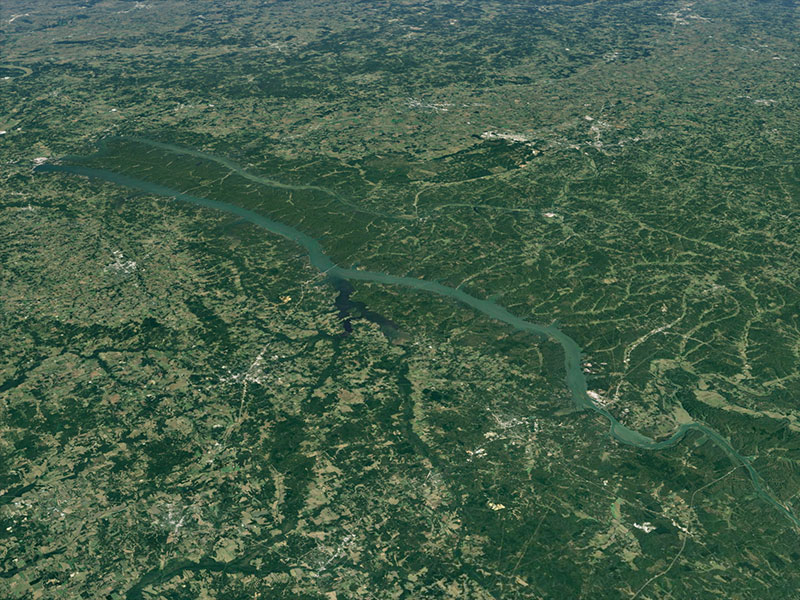