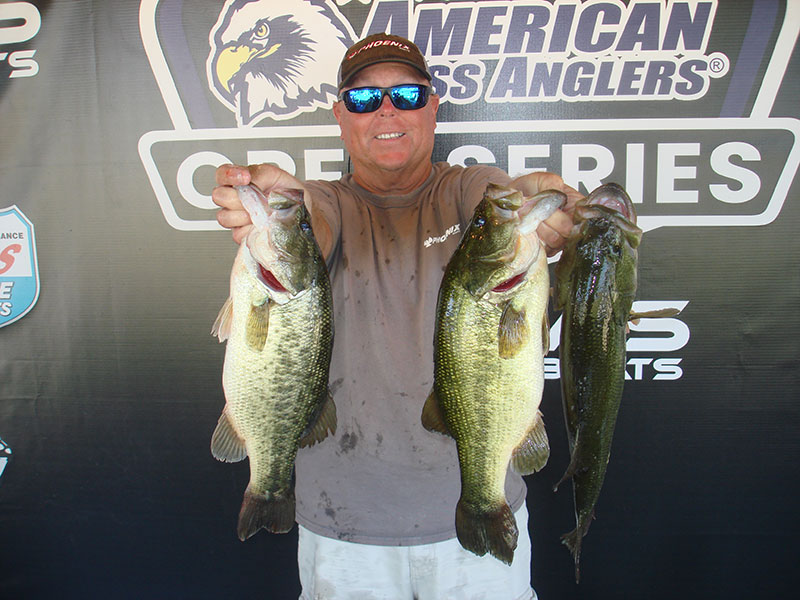 The anglers fishing the Virginia Division 19 and the Maryland Division 21 ran out of Smallwood State Park in Marbury, Md. The angler from Fredericksburg, Va. brought in a perfect 2-day limit of 10 bass weighing 31.21 pounds.

On the first day, Williams landed the division lunker, a 4.69-pounder. He finished the day with a 5-bass tournament limit for 17.75 pounds. On the second day, he brought in 13.36 pounds.

“I caught every fish on a SPRO Poppin’ Frog, both days,” he revealed.

In second place, Aaron D. Dixon from Bel Alton, Md. finished with 10 bass weighing 27.97 pounds. He held 9th place with 11.61 pounds on Day 1. On the second day, Dixon landed 16.36 pounds, the biggest bag of the day and the second largest single-day sack caught in the tournament.

“On the first day, I caught all my fish on topwater baits,” Dixon stated. “On the second day, I moved to a new location to look for bigger fish. I caught some fish on a jig, some on a spinnerbait and one on an A-rig.”

Tom E. Bateman from Welcome, Md. took the third position with 10 bass weighing 26.57 pounds. Bateman sat in 11th place after Day 1 with 11.33 pounds on the board. He brought 15.24 pounds to the scale on the second day to leap eight levels and also took home a $500 bonus from Garmin for using their electronics. 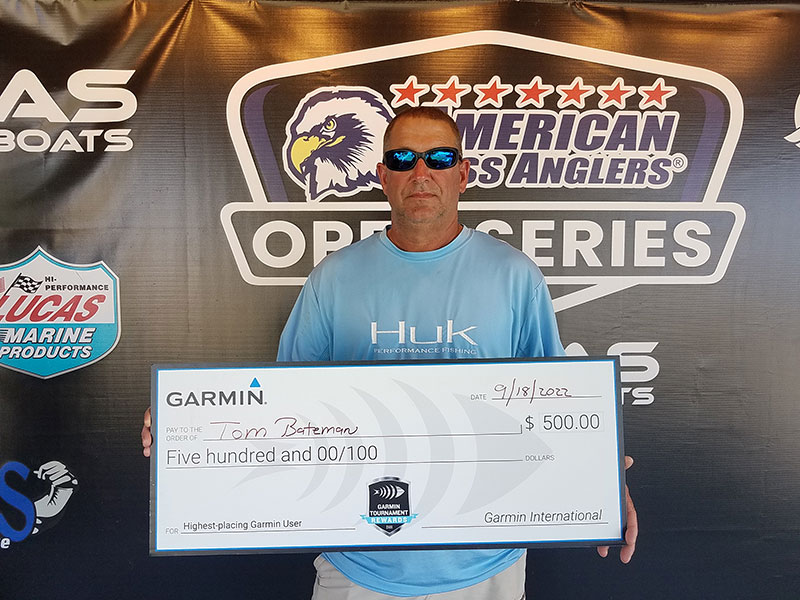 “I used a swim jig, a crankbait and a little Rico,” Bateman remarked. “I was fishing around grassy edges in two to three feet of water.”

Landing in fourth place, Ryan D. McCarthy from Warrenton, Va. found two 5-bass daily limits for 26.53 pounds. He held third with five bass at 14.58 pounds on Day 1. He anchored the sack with a 4.59-pound kicker. On the final day, he brought in 11.95 pounds, dropping one spot.

Ed Farrington of California, Md. stayed in fifth place among the boaters both days. He finished with 10 bass for 24.64 pounds. On the first day, he found 13.41 pounds and added 11.23 pounds the second day.

In the Co-Angler Division, Duke H. Bevins of Aylett, Va. led wire to wire. He finished with a perfect 2-day limit of six bass for 17.07 pounds. Bevins brought in 10.97 pounds on the first day, capped by a 5.09-pounder that won the tournament lunker title. 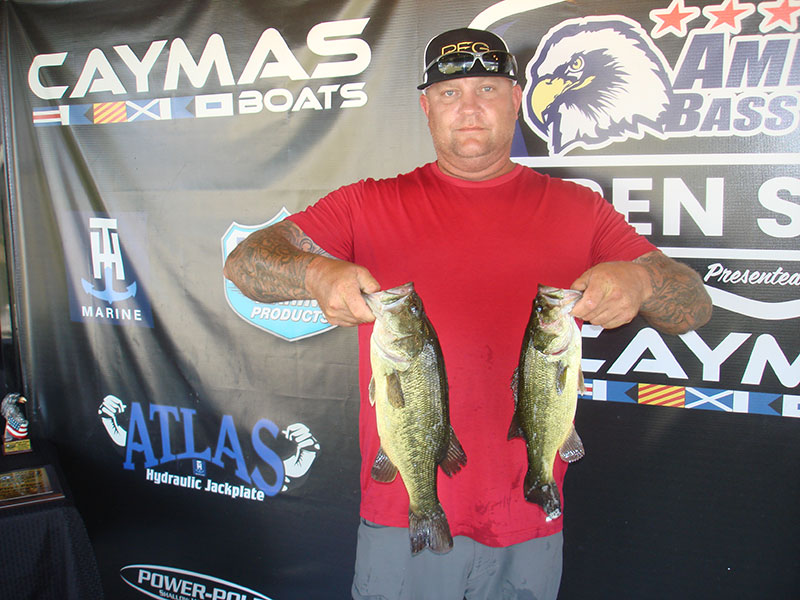 “On Day 1, I punched mats with a Zoom Z-Craw with a 1/2-ounce weight,” Bevins detailed. “On the second day, I caught my biggest fish on a bladed jig. I caught the rest on a Senko.”

On the second day, Bevins added 6.10 pounds to win by more than three pounds. Bevins earned $850 for the victory and a $90 bonus for the big bass.

Jonathan “J.P.” Hamilton of Newburg, Md. stayed on top of the action. He held second place throughout the event, finishing with six bass going 13.87 pounds.

“I caught all my fish both days on a black SPRO Poppin’ Frog,” Hamilton advised.

Hamilton caught three keepers for 8.34 pounds on Day 1, anchored by a 4.78-pound kicker. He followed up with 5.53 pounds on the final day.

Moving into the third spot for the co-anglers, Gretta J. Pittman from Adelphi, Md. caught five keepers for 13.15 pounds. She held seventh place on Day 1 with a 3-bass daily limit going 5.58 pounds including a 3-pound kicker. He moved up four slots on the final day, catching two bass at 7.57 pounds to collect $350.

“I threw a KVD Sexy Dog and a Senko in bone color,” Pittman said.

Robert A. Wedding from Welcome, Md. stayed in fourth place for two days. He ended the event with six bass for 12.87 pounds. He caught 6.88 pounds on the first day and added 5.99 pounds the final day.

Making a big leap on the final day, Hart Hall from Alexandria, Va. rounded out the top five co-anglers with four bass going 11.11 pounds. He sat in 13th place on Day 1 with one 2.52-pound fish. He brought in 8.59 pounds on the second day, jumping eight spots.

For more information about this tournament, call Tournament Director Rodney Michael at (256) 497-0967. 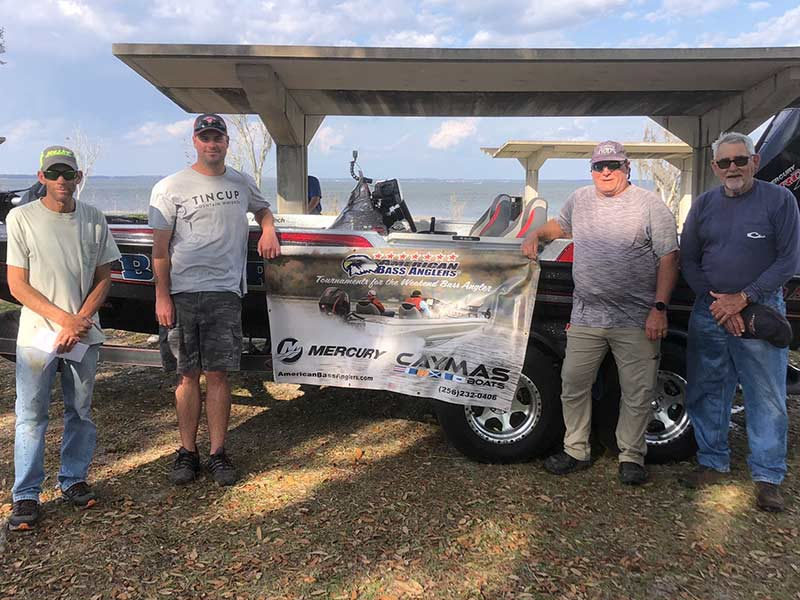 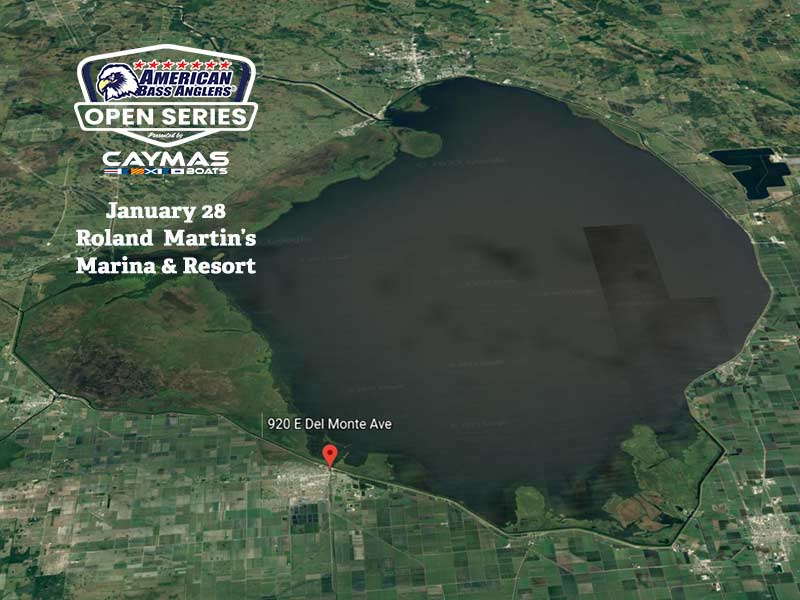