White Comes From Behind To Win Solo 150 Championship 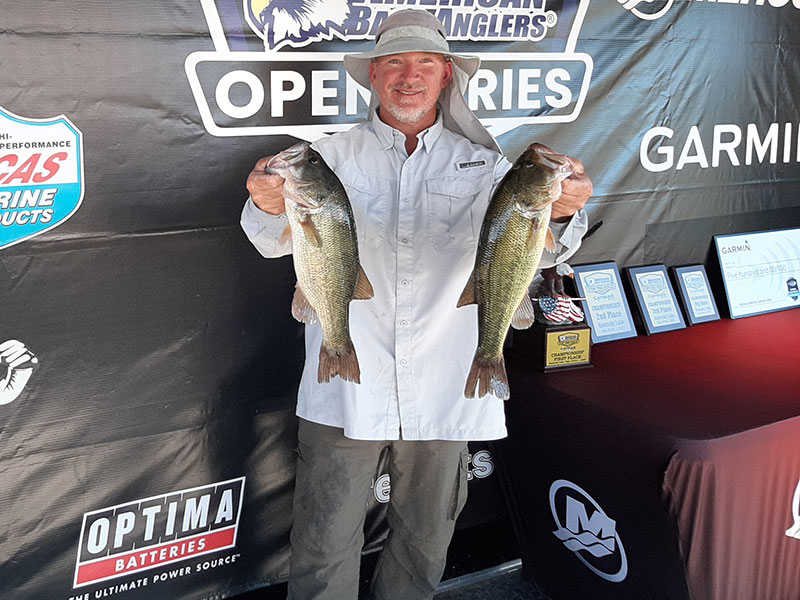 Running out of Paris Landing to fish Kentucky Lake near Buchanan, Tenn. on Sept. 30-Oct. 1, 2022, the angler from Soddy Daisy, Tenn. finished with seven keeper bass going 17.78 pounds. Anglers could only keep bass measuring at least 15 inches long. The new champion took home a check for $25,000.

“I did something I do in the Carolinas that I call the ‘Lake Norman Hustle,’” White described. “I run as many docks as I can as fast as I can and fish as shallow as possible. I was skipping a jig under the docks. If it hit bottom, I hopped it once. If nothing struck, I went to the next stop. If they were there, they would get it.”

White brought in three fish for 7.80 pounds on Day 1. That put him in eighth place and more than six pounds out of contention. On the second day, White jigged his way to winning the championship, catching four bass weighing 9.98 pounds, the second heaviest bag caught the final day. White locked down that sack with a 3.15-pounder to guarantee his victory.

“I don’t know how many docks I fished on the final day,” White related. “I got five bites all day. I used a 1/2-ounce True South Custom Lures jig that he specifically makes for me. The trailer didn’t seem to matter, just a craw. I used two different jigs with two different trailers in natural shades of brown and green with a green pumpkin trailer. I threw them on a 7-foot, 9-inch Piscifun flipping stick. The extra length allows me to get extra momentum on that jig so I can skip it better. At some of the bigger docks, I could skip the jig 25 to 30 feet under it.”

Finishing second, Walt Stevens from Bernice, La. landed seven keepers for 16.10 pounds, less than two pounds off the pace. Stevens pocketed $7,000, a $1,000 for each keeper. 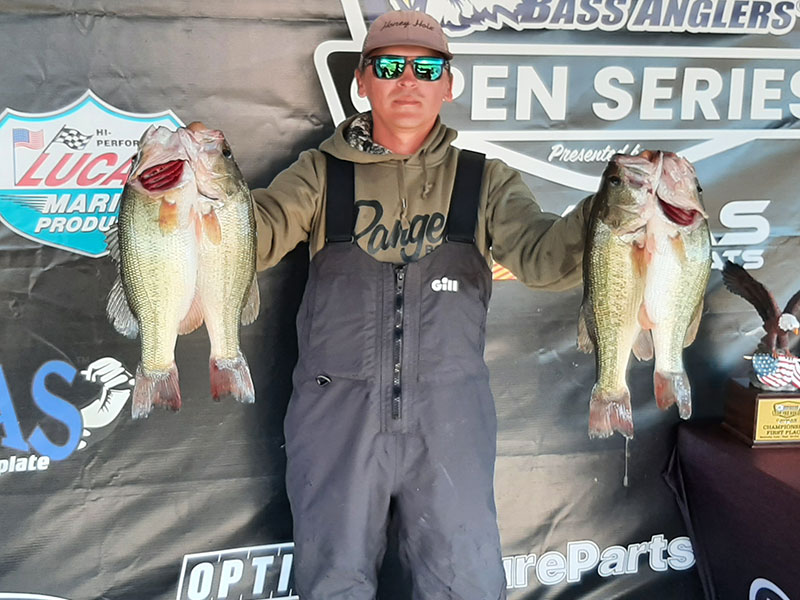 “In practice, I got very few keeper bites,” Stevens acknowledged. “On Day 1, I ran to places where I got a keeper bite in practice. After that, I just explored that area. I got three keeper bites on the first day. I caught two on a ChatterBait and dumped a 3-pounder. I knew when I lost that fish that I lost the tournament. I was catching so few fish, I couldn’t afford to lose one.”

The two keepers Stevens brought in on Day 1 put him in 13th place with 4.34 pounds. He made up a lot of ground the second day. The only person to land a 5-bass daily limit on Day 2, he dropped the scale to 11.76 pounds, the largest sack weighed that day and second largest single-day sack in the event. That gave him a jump of 11 slots. One of those five bass weighed 2.88 pounds.

“On the second day, I went to a totally different area where I got one bite in practice,” Stevens explained. “I picked up a spinnerbait, threw it up against the bank and caught the big one on the first cast. For about 20 straight casts after that, I caught short fish. I just stayed around that area and caught two more keepers. I didn’t get my next two keepers until about noon. I caught both by flipping a bug off one brush pile sticking out of the water.”

Takin third place both days, Brad Harmon from Ringgold, Ga. finished with five bass at 14.67 pounds. On the first day, Harmon pulled in three keepers for 9.41 pounds topped with a 3.51-pound kicker. He caught two good fish the second day for a 5.26-pound bag. Harmon earned $4,000 for the effort. 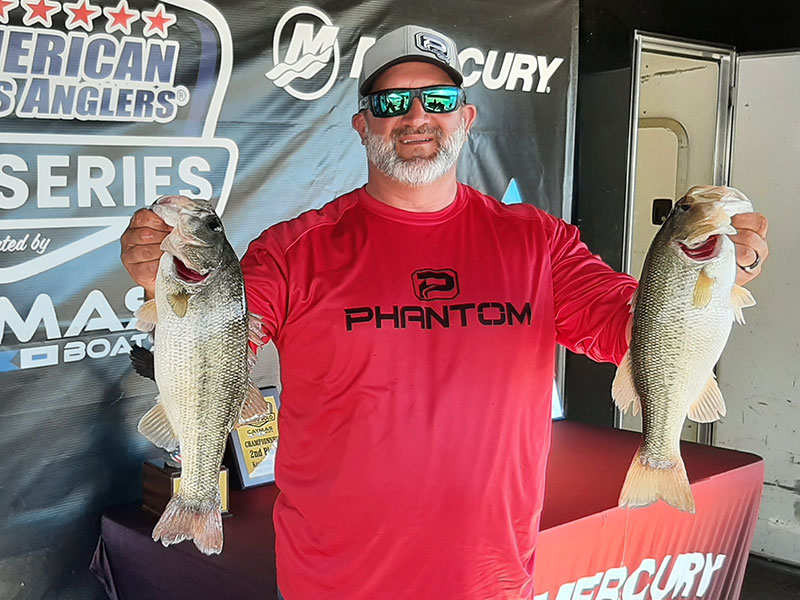 “On the first day, “I started throwing topwaters,” Harmon revealed. “My biggest bass was my first fish. I caught another good fish and some short fish. Then, I threw a crankbait to catch my third bass. I fished topwaters around brush piles on Day 2. I only had one keeper at 1:30 p.m. when I caught my second keeper.”

Tony Couch of Buckhead, Ga. finished fourth with seven bass going 14.35 pounds. He held fifth place on Day 1 with four keepers for 8.80 pounds including a 2.81-pound kicker. On the last day, Couch brought in three bass for 5.55 and picked up a check for $3,500.

“It was a hard row,” Couch said. “Fishing was tough all week. I found one small stretch during practice that had a lot of fish, but they were small. Without finding anything better, that’s where I went during the tournament. I spend two days fishing a 100-yard stretch of bank. I lost one on the first day, so that hurt.”

The only angler to land a 5-bass limit on Day 1 and one of only two anglers to catch a daily limit, Ryan Lloyd held a good lead with 14 pounds, capped by a 3.45-pounder. The Brandon, Miss. angler blanked the final day, but still took home $3,000 for fifth place as well as a $500 bonus as the highest finisher using Garmin products.

“Fishing was tough, but I lucked up and found two areas the first day,” Lloyd commented. “Very early in the morning, they started busting and I was able to get in there and put some in the boat. By 7:45 a.m., I had three in the boat and missed three more. I found another windblown bank and landed about five more. I culled once. At 10 a.m., the water got a little rough and everything died down. I did not catch another fish after 10 a.m. On Day 2, I had bass biting the topwater bait early in the morning, but they just didn’t bite the hooks.”

Terry L. Tucker of Gadsden, Ala. finished sixth with five bass weighing 13.15 pounds. He held second on Day 1 with four keepers going 10.44 pounds, the third heaviest single-day bag landed in the tournament. He anchored that sack with a 3.21-pounder. Tucker brought in two bass for 2.71 pounds on the final day, dipping four rungs. He caught all his fish either flipping or throwing crankbaits.

In the seventh slot, Bradley G. Gardner of Molena, Ga. finished with three bass and 11.76 pounds. On the first day, Gardner held fourth with two bass for 9.36 pounds. One of his fish weighed 4.41 pounds, which took tournament lunker honors. Gardner caught one 2.40-pounder on the last day, dropping three places.

“I found a little cut in a rocky bank with some wind blowing up on it going into a creek,” Gardner recalled. “I started fishing that cut with a Spook and saw some fish blow up on a flat. I threw the Spook to them and caught the smaller of my two Day 1 bass. I left that spot and came back later. I saw some bait and threw the Spook at them. I twitched it twice and the big one came up and ate it.”

Finishing ninth, Kevin Lasyone from Dry Pong, La. brought in four keepers for 9.79 pounds. He sat in seventh place on Day 1 with three bass and 8.34 pounds. One of them weighed 4.05 pounds, the third largest bass caught in the tournament. He caught one 1.45-pounder on the last day to slip two notches.

Wrapping up the top 10 finishers, Danny R. Hall of Ellijay, Ga. caught four good ones for 9.63 pounds. He held 19th place on Day 1 with two bass weighing 2.33 pounds. On the final day, Hall landed two bass for 7.30 pounds. One weighed 4.15 pounds, the second largest bass brought to the scales in the tournament.

Each of these anglers earned the right to fish the first ABA Top 150 Solo Series Championship by competing in one of two regional divisions, Southeast and Southwest. Each division conducted three tournaments during the season. At each event, the competitors earned points based on how they finished in that tournament. The top 15 points leaders in each division at the end of the regular season received an invitation to fish the championship on Kentucky Lake.

For more information about this tournament, call Tournament Manager Floyd Vaughn at (256) 230-5633. 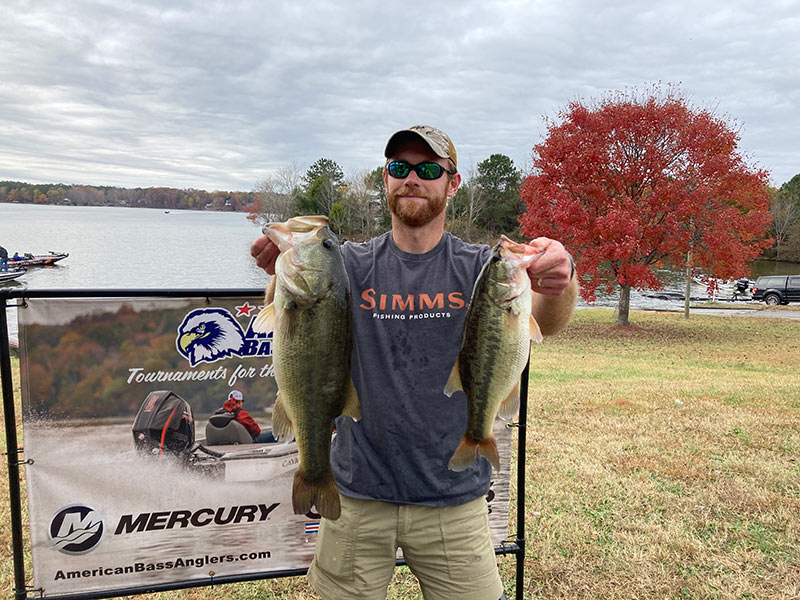