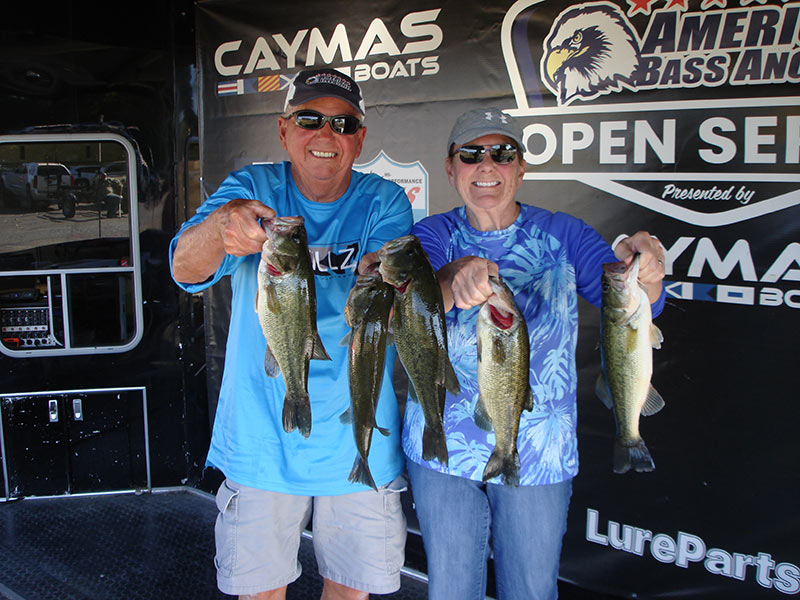 Launching at Sanders Ferry Park in Hendersonville, Tenn., David and Brenda Presley landed two straight 5-bass daily tournament limits, the only team to catch a limit either day in the event. Their 10 bass weighed 23.46 pounds giving them a decisive win by nearly 10 pounds.

“We caught 21 fish the first day with seven keepers,” David reported. “We started in the middle part of the lake. I threw a Baby Brush Hog all day long on both days. We were fishing in four to six feet of water around scattered grass.”

Team Presley held the lead by about a pound on the first day. They brought in 10.60 pounds, the only couple to bring in a double-digit sack on either day. They anchored that bag with a 2.71-pound kicker.

On the second day, Team Presley found five more keepers to pad their lead with an extra 12.86 pounds. The Presleys capped that Day 2 catch with a 4.27-pound Largemouth. That gave them more than enough weight to bring home the annual championship title with their first tournament win.

“On the second day, we caught 20 fish with only five keepers, the ones we brought to the scale,” David said. “We had a limit by 10:30 a.m. on Day 2. After that, the action died. We’re really excited about winning our first tournament.”

Randall and Cindy Clark took the second spot. They finished with seven keepers for 13.58 pounds. 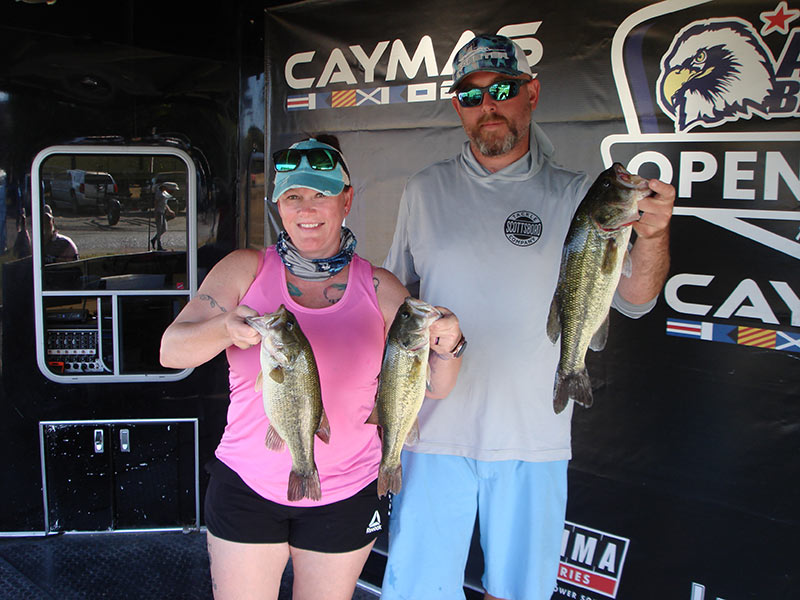 “On Day 1, we caught all our fish on crankbaits,” Randall revealed. “On the second day, we caught four keepers on four different lures. We lost one good smallmouth, but it wouldn’t have helped us. We fished from the marina to the big bridge.”

In third place, Team Smith, Randy, and Jacalyne, brought in three keepers weighing 11.68 pounds. They also finished the season as the Anglers of the Year runner-up team. 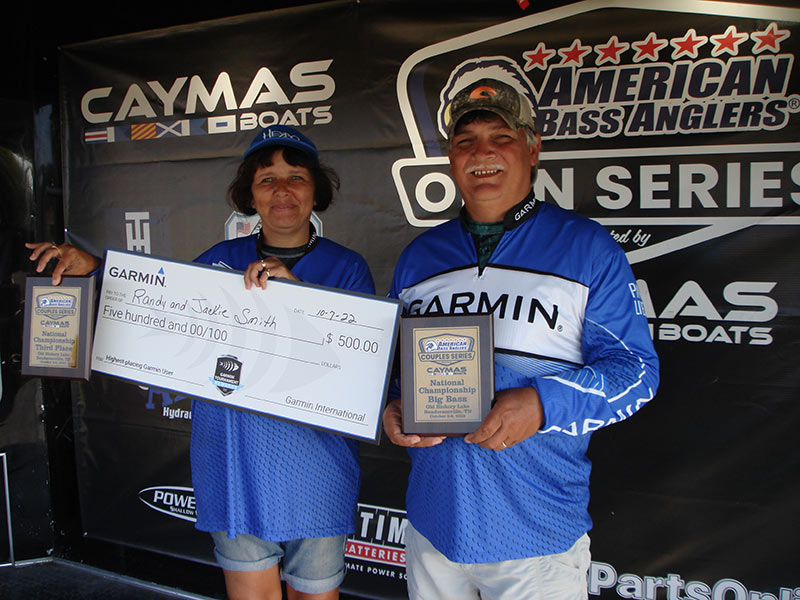 On Day 1, the Smiths sat in second place with two keepers weighing 9.52 pounds. One topped out at 4.95 pounds and took the tournament lunker title. Their other bass on Day 1 dropped the scales to 4.57 pounds, the second largest fish weighed in the event.

The Smiths landed one bass going 2.16 pounds to slide a notch into third on the final day. They received a $500 bonus from Garmin as the highest finishers in the tournament using Garmin products. That gave them a total of $1,285 in winnings.

“We threw crankbaits and shaky heads both days,” Randy said. “We made a long run way up the river. We fished every little cut and went into the backwaters. The big bass hit a shaky head at about 9:30 a.m. on the first day. We broke a bigger bass off.”

Bryan and Sharon Waddell landed in fourth place with five bass for 9.72 pounds. The Waddells held sixth place on Day 1 with four bass going 5.65 pounds. They found one 4.07-pounder on the final day to jump two levels.

“We were here fishing the lake for six days,” Bryan commented. “We caught five keepers and that’s what we weighed. We threw square-billed crankbaits and spinnerbaits. We fished from the mid-lake down. We stayed in sight of the boat ramp much of the time. On the first day, we caught all our fish in the last hour before we needed to return to the weigh station. We had four bites the final day.”

Sean and Kathy Capes rounded out the top five teams with four bass at 9.67 pounds. They held fourth place on Day 1 with three keepers at 7.47 pounds including one 2.96-pounder. Team Capes landed one 2.20-pound bass on the second day to drop one spot to fifth place. 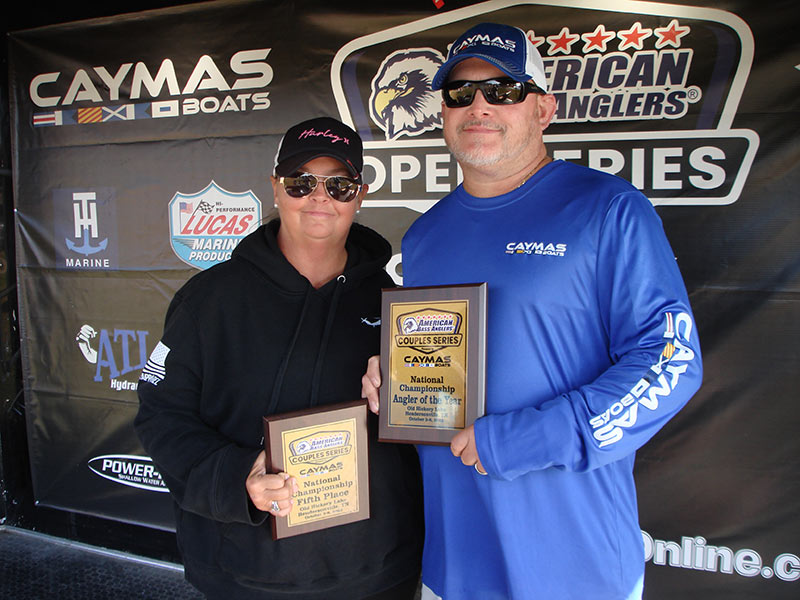 “We caught four keepers on four different baits,” Sean stated. “I caught one on a Texas rig, one on a Senko, and one on a crankbait. Kathy caught a keeper on a shaky head. We stayed close to the marina both days.”

However, they scored 1,980 points in the championship tournament for their 5th place finish. That gave them a total of 2,966 points for the year, surpassing the Smiths by 22 points for the 2022 Anglers of the Year title. They successfully defended their 2021 AOY title. As the 2022 Anglers of the Year, they received a $1,000 gift card from Garmin and two Optima batteries.

“It feels great to be Anglers of the Year for the second year in a row,” Sean remarked. “I was a little bit in shock when we won it last year. Kathy and I want to spend every moment we can together and take advantage of everything we can. We’ve created so many memories and met so many friends fishing this trail. It’s our favorite thing to do.”

Named for the nickname of general and later President Andrew Jackson who lived in the area, Old Hickory Lake covers 22,500 acres on the Cumberland River about 25 miles upstream from Nashville. The riverine impoundment stretches about 97 miles along the Cumberland between the Old Hickory Dam in Sumner and Davidson counties and Cordell Hull Dam near Carthage.

The entry fee for the American Fishing Couples Series one-day events is $100 and the top teams are invited to compete in the championship each fall.