Ashley shared her thoughts, “It was a fun day fishing.  We caught at least 20 fish in the morning and had our limit by 9.  Then the bite kind of tuned off.  We caught all of them on a drop shot on standing timber.  We would like to thank our sponsors and our tournament directors for everything they do to make it possible for us to fish with a great group of couples.”

Second place was claimed by Darren & Amy Taylor with 5 bass weighing a total of 11.50 pounds.  For their efforts Darren & Amy took home $488 in prize money. 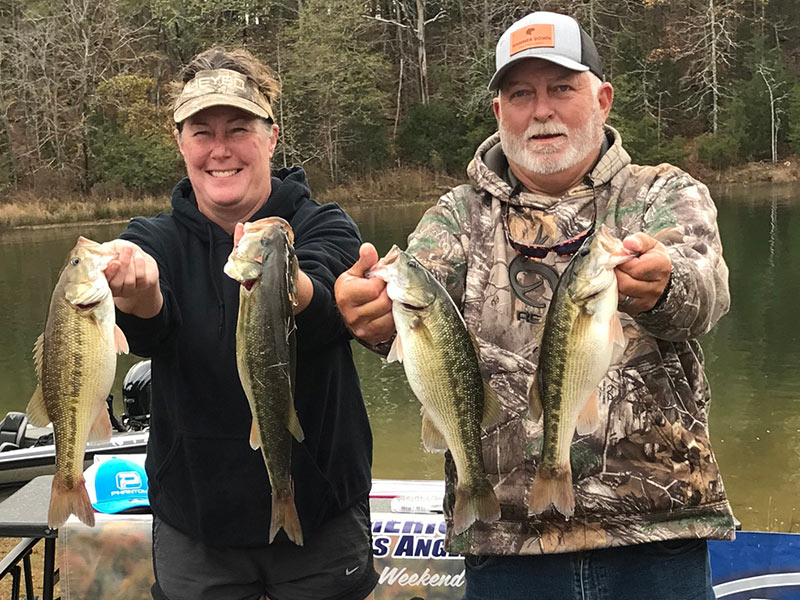 Amy tells us they caught their fish using “Shaky heads up the river fishing stumps and humps.  Pattern included 15-foot stumps with bait on them.  Beautiful day and always love fishing with all our ABA family that we have acquired over the past couple of years.  We love to fish in any kind of weather on God's creation.  Such a blessing to have the friendships we have made, and so thankful for all the special people we get to do something special with.  Always excited when one comes up to talk, laugh and have a good time.  Most of all, so thankful for all our great directors and their hard work.. 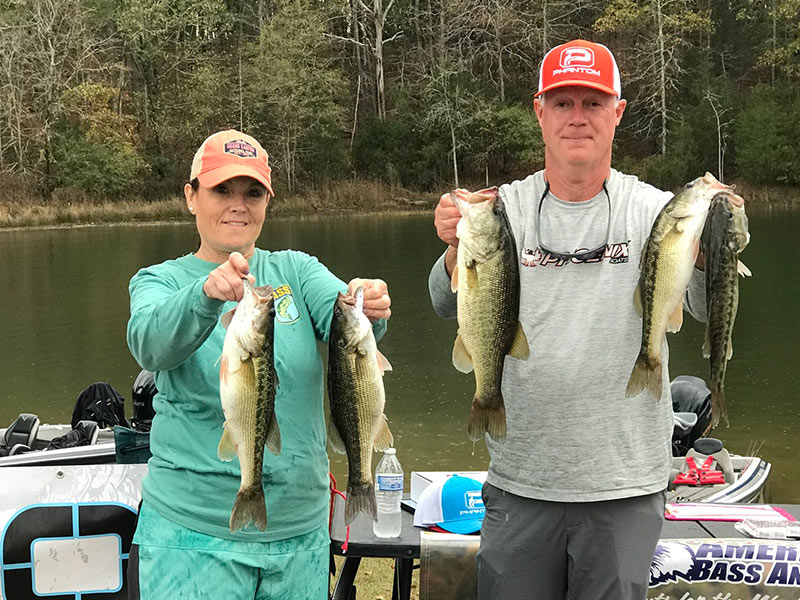 Jim Collins shared their strategy with us, “After raining for two days and being fairly cloudy, we thought the fish may be up more shallow. We decided to stay in the mid lake area. We started on main lake points then moved into the creeks later in the day fishing windy areas. The fish seemed to be spread out and shallow, on secondary points, or halfway back in pockets. Caught most of our fish on shallow and medium crank baits in shad pattern, medium crank baits in phantom brown, and white 3 1/2 “ swim bait with 1/4 oz head. Also caught a few on drop shot and shaky head. We always enjoy catching up with our fishing friends.”

The new team of William & Beth Shipes took fourth with 5 bass and a total weight of 10.66 pounds to earn $195 in prize money. 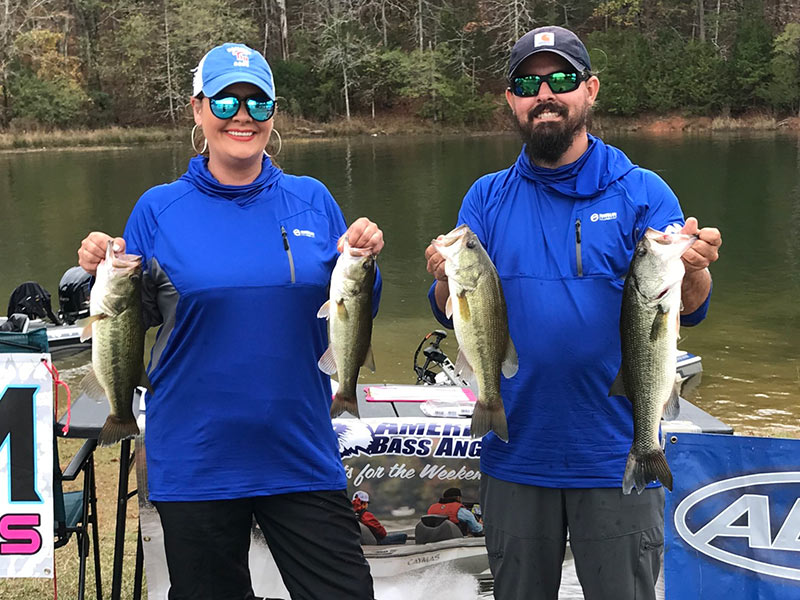 William tells us, “He and Beth fished the back of pockets all day with a buzzbait and shakey head to catch our fish. We really enjoyed our day, the weather, and the warm welcome the tournament group gave us. We look forward to fishing the next event at Lake Murray.”

Craig & MaryAnn Sahms took fifth with 5 bass and a total weight of 10.25 pounds to earn $98 in prize money. 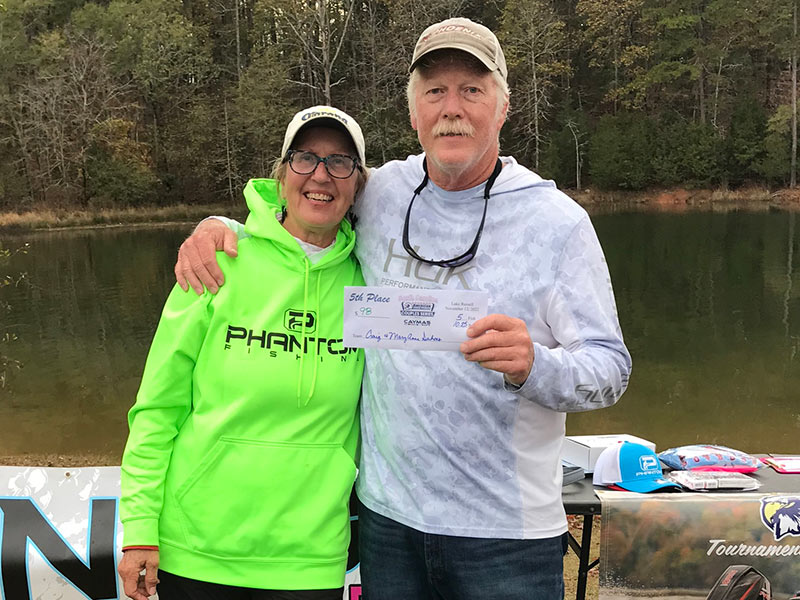 We asked Craig to tell us about how he and MaryAnn caught their bag, and he said, “We started in the Savannah River arm alternating between a spinnerbait on the windy flats and a shaky head around brush and rocks. We had a small limit by 9:00 AM and ran over to the Rocky River arm where Mary Ann caught a couple decent fish on a shaky head around some channel markers, helping to cull 2 or 3 more fish. Around 2 PM, the wind got up again and we headed back over to where we started.  We immediately caught a good fish on a spinnerbait and a few smaller keepers on a shaky head. I caught a good 2-lber to cull up on the last cast that put us in money.”

The Men’s Biggest Bass of the tournament was caught by Mike Criminger, one of our newest members.  His fish locked in the scales at 4.06-pounds earning him $130. 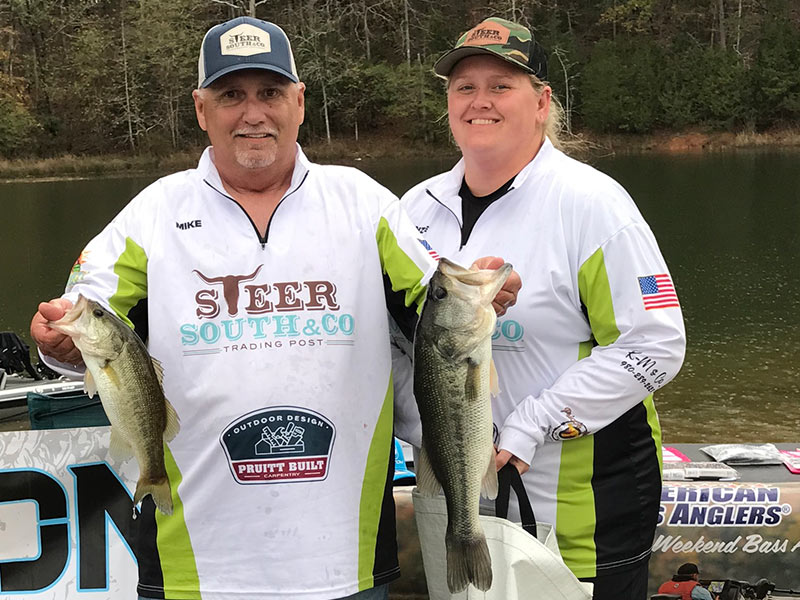 Mike tells us, “This was the first time we’ve fished Lake Russell, so I focused on main channel points with rock and small pods of grass lines, fishing a Berkeley J-Walker 120. I’ve always enjoyed fishing new lakes and I look forward to fishing Lake Russell again.”

The Ladies Biggest Bass of the tournament was caught by Ashley Sutton.  Her fish locked in the scales at 3.01-pounds earning her $125. 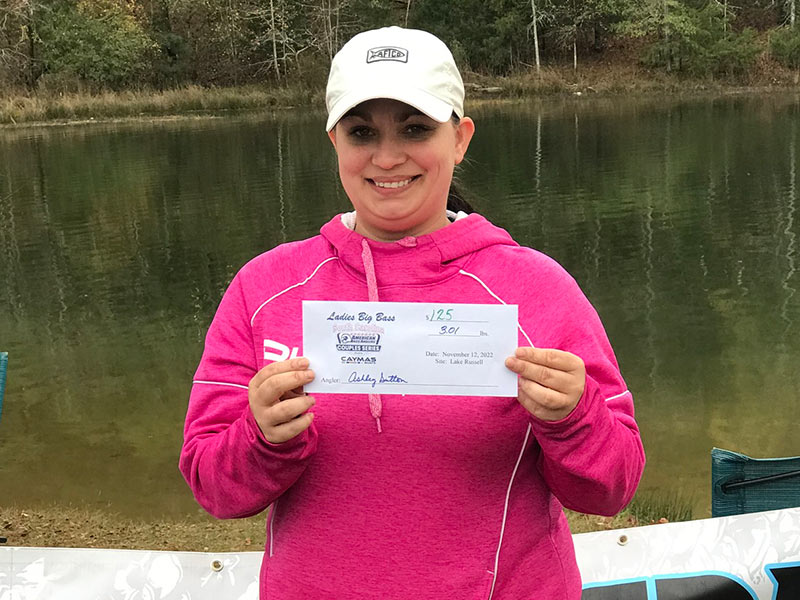 John & Susan Mills won the G-Line $100 Bounty for being the highest finisher powering the trolling motor with a G-Line Lithium Battery.

We’d like to extend a warm welcome to our newest members that joined us for this event:
Ryan Coyle & Alyssa Madron, Mike Criminger & Kinzie Gilreath, and William & Beth Shipes

Thanks to our sponsors we can provide drawings for those teams that do not earn a paycheck. Our sponsor items for this event included Five Bass Tackle, Yo-zuri, Phantom Outdoors, Choo Choo Custom Baits, and JC’s Outdoors products.

The next tournament for the South Carolina Division will take place on December 10, 2022 launching from Siesta Cove on Lake Murray.