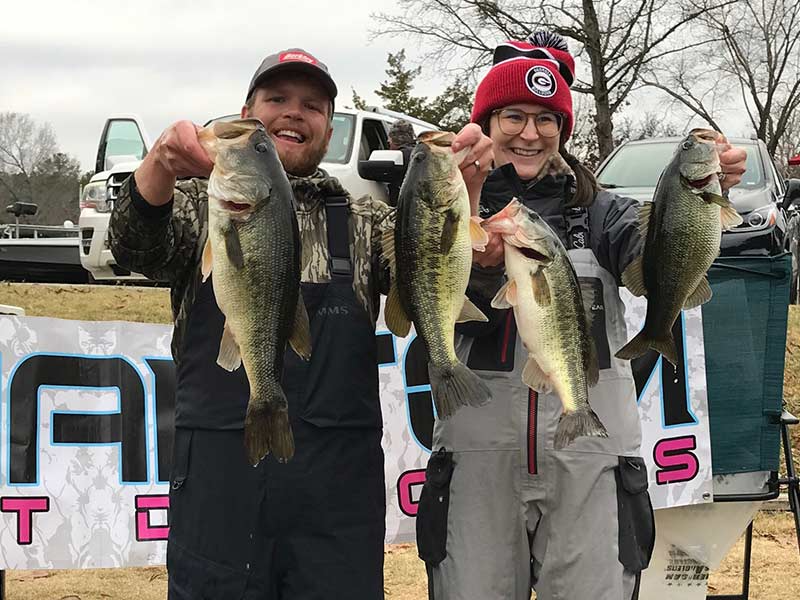 Brad & Ana focused on shallow areas with rock-throwing a Berkley Frittside 5 in red.  They caught a lot of fish and had a lot of fun.  They told us that they really enjoy fishing with the couples and wish they could fish more of the events like they used to.

Second place was claimed by Harry Johnson with 5 bass weighing a total of 18.86 pounds.  For his efforts, Harry took home $544 in prize money. 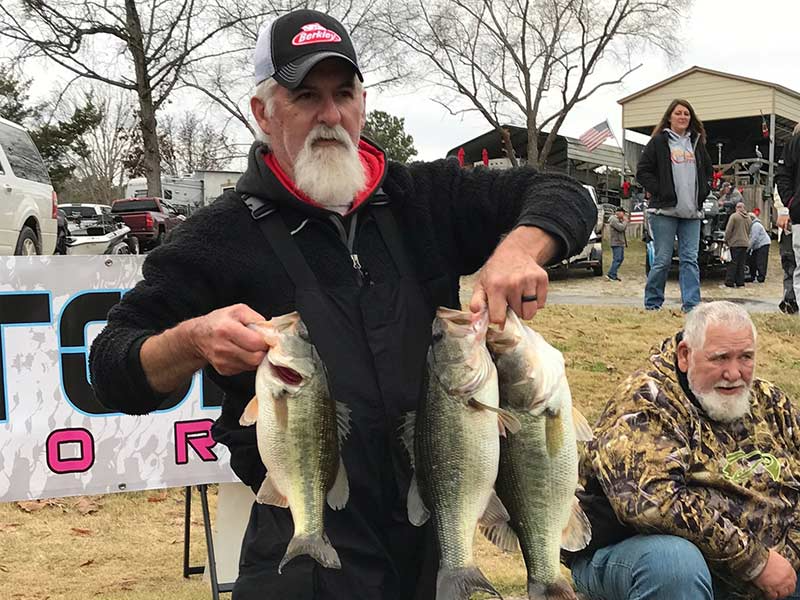 Harry tells us that he fished rock on wind-blown banks early burning a ¾ oz. spinner bait.  He had about 16 pounds in the boat by 10 AM upgrading several times later in the day.  Every fish weighed came on a spinner bait.  We missed Kim at this event but are sure she had fun at the grandbabies' first birthday party. 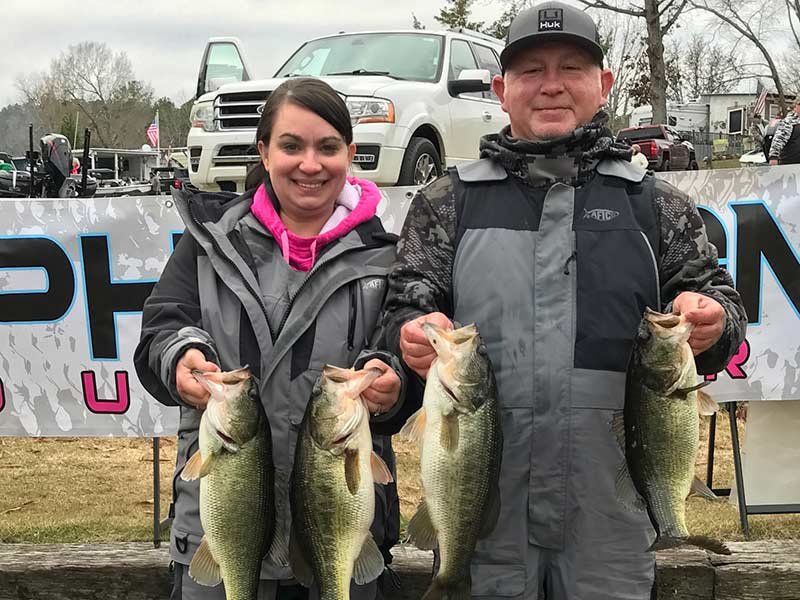 Ben & Ashley caught their limit on a big flat down the lake with ½ oz. spinner-baits on grass catching 3 in their first 5 casts.  Then went to brush piles catching a 4 pounder and 3 pounder before returning to that flat and upgrading their catch.  Weather helped a lot, but grass was a big part of their pattern.

Don & Martha Goodfellow took fourth with five bass and a total weight of 15.39 to earn $218 in prize money. 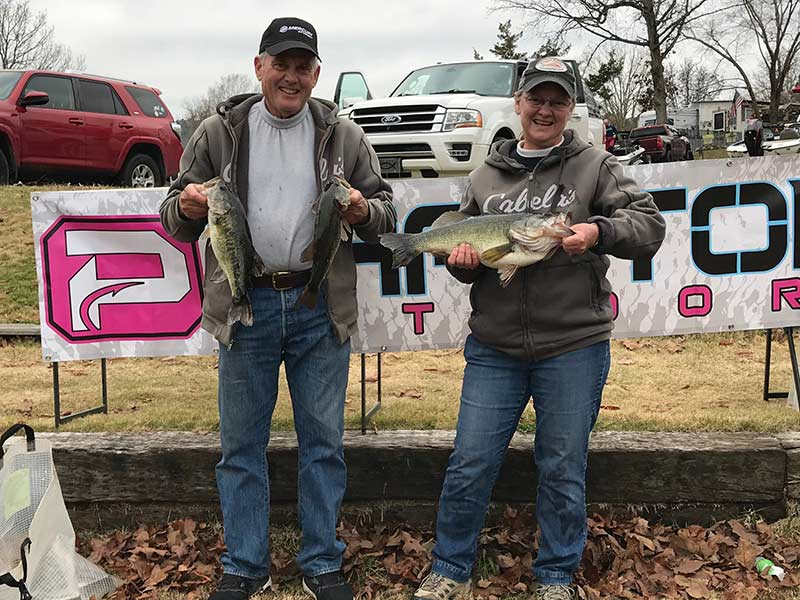 Most of their fish were caught early winding crankbaits on shallow rocky points and banks.  Their nice bag was anchored with Martha’s 6.35-pound Ladies Big Bass.  Her big fish was caught later in the day, in 12 feet depth of water, on the end of a rocky point with a shakey-head.  Martha thought it was important to note that this bass was hooked with her sensitive Kissell Kraft rod and Lew’s reel.  Several fish caught earlier were with her Yo-Zuri Rattlin’ Vibe lipless crankbait, in the green-silver color.  Interesting to note that these tackle companies are all sponsors for the South Carolina Couples Trail. 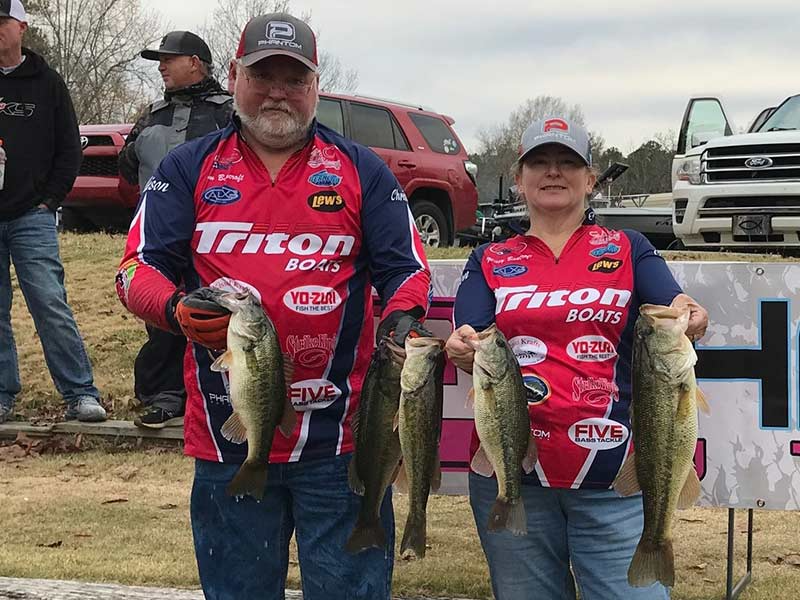 Tom & Missy caught their limit using red and green trick worms fished wacky style on brush, stumps, and trash cans.  First time ever to see a trash can brush pile.  Caught a 3-pounder in practice as well as a 3-pounder in the tournament on it.

The Men’s Biggest Bass of the tournament was caught by Brad Rutherford.  His fish locked in the scales at 5.41 pounds earning him $145.

The Ladies Biggest Bass of the tournament was caught by Martha Goodfellow.  Her fish locked in the scales at 6.35 pounds earning her $140.
Top Finishers

Tom & Missy won the G-Line $100 Bounty for being the highest finisher powering the trolling motor with a G-Line Lithium Battery.

$50 Smallest 5-Fish Limit sponsored by Berkeley Outdoors went to the team of Meredith & Brittany Havird with a limit weighing 9.37 lbs.

Thanks to our sponsors we can provide drawings for those teams that do not earn a paycheck. Our sponsor items for this event included products and support from Yo-zuri, Berkley Baits, Five Bass Tackle, Phantom Outdoors, Choo Choo Custom Baits, JC’s Outdoors, and McElveen Buick GMC.

The next tournament for the South Carolina Division will take place on Saturday, February 25, 2023 launching from One Stop Marina on Lake Greenwood (5121 Old Laurens Road, Greenwood, SC 29649).