January 08, 2023, McCormick, SC. Forty-nine anglers battled muddy water and floating debris to find feeding fish. Tony Holliday of Piedmont, SC brought back five-fish that locked in the scales at 13.49 lb. His limit was anchored by a 4.81 lb. kicker largemouth.  For the victory, Tony took home a nice first-place plaque and $801 cash. He also took down the first-place option pot for another $288, bringing his total winnings to $1,089. 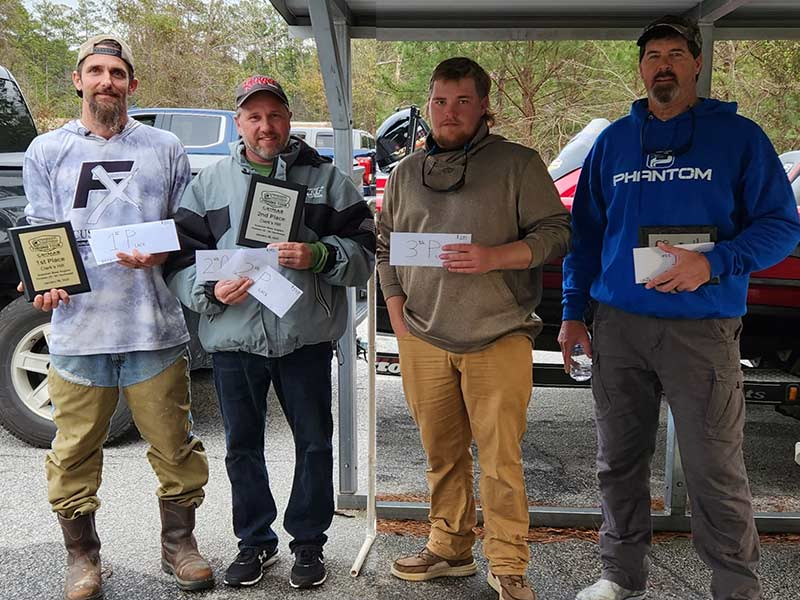 Second place was claimed by Truett Hill of  Laurens, SC with a five-fish limit of fish totaling 13.48 lb. anchored by a 3.98 lber. For his efforts, Truett took home the second-place plaque and $548 in prize money. He also bagged the second-place option pot for an additional $192. His total payout on the day was $740.

Gill Senn of Anderson, SC hooked third with five good fish and a total weight of 13.36 lb. and took home $281 in cash.

The fourth place position was filled by Mike Guilbeau of Evans, GA  with a five-fish limit that scaled out at 13.34 lb. That bag was good enough for $231 in cash.

Our fifth-place finisher was Phillip Anderson of Saluda, SC, who sacked a five-fish limit that weighed 12.95 lb. He took home $195 for his efforts.

The Biggest Bass of the tournament was caught by Mike Guilbeau. His fish locked in the scales at 5.64 lb. earning him a plaque and an additional $240 cash.

Here are our top 10 with a tie for 9th place

The next tournament in this division will take place at Lake Hartwell on February 26, 2023 launching from the Green Pond Landing in Anderson, SC.

For more information on this event or division please contact local director Zach Green at 478-733-6473 or visit www.americanbassanglers.com