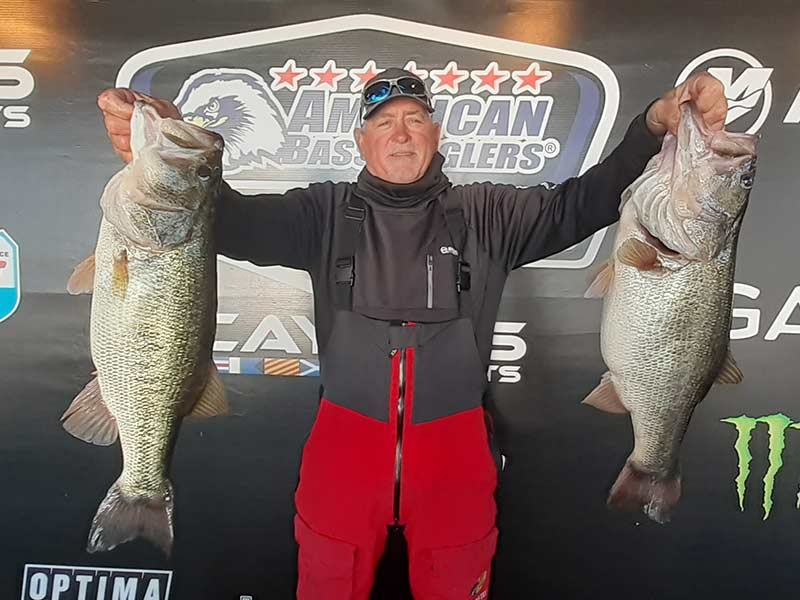 Launching out of Cassels-Boykin State Park in Zavalla, the angler from Jasper brought in a 5-bass tournament limit weighing 24.48 pounds for a 4.90-pound average. Wagnon beat his nearest competitor by seven pounds. He greatly upped his average by landing the tournament lunker, a 7.80-pound largemouth. He pocketed $2,300 for the win to start the season off the right way. He also collected a $400 bonus for the lunker.

“I fished deep all day long,” the first champ of the new season stated. “I hit isolated stumps in about 25 feet of water. That was the key to my two biggest fish. I had a limit by 8 a.m. and caught about 20 fish total. I stayed in a spot of about 10 acres and just kept working it. Once I caught that first big fish on a stump, I decided to do that the rest of the day.”

In second among the boaters, Keelan J. Manuel came over from Sulphur, La. to finish with a 5-bass limit going 17.48 pounds. He capped that catch with a 5.94-pounder. Fishing just his second ABA Open Series event, he earned $1,000 for second place.

“We started on a hard spot and started catching fish right away, but no size to them,” Manuel remarked. “I caught one of my biggest fish on a square-bill crankbait off that spot. Then, we moved out and fished Carolina rigs near points and slowly made a limit. We fished another spot with some stumps and other hard structure. There, I caught my 5.94-pounder on a football jig. In the last hour, we fished one other spot off the edge of a roadbed just to kill some time and I culled up one fish.”

Right behind in third for the boaters, Aaron M. Freeman of Montgomery, Texas, brought in five bass for 17.10 pounds. He went home with an extra $700 in his pocket.

“I fished the last two days and it was really tough with the wind,” Freeman lamented. “In the tournament, I fished offshore and tried to cover a lot of water. My best bait was a Texas-rigged worm thrown in brush piles and dragged through some hard spots. I lost one good fish that mattered. I don’t think I would have won with that fish, but I probably would have had about 22 pounds. I think it was well over seven pounds.”

Placing fourth, Steve D. Evans from Lufkin found a limit of bass at 15.28 pounds to win $600. Rounding out the top five boaters, Braxton B. Hollenshead of League City landed five keepers for 12.28 pounds and $500.

In the Co-Angler Division, William L. Easley of Pollok swept it all with a 3-bass division limit weighing 9.25 pounds. His largest bass, a 4.12-pounder, took the division big bass title. That gave Easley a 3.08-pound average and a winning check worth $1,000. He also earned a $245 bonus for landing the division lunker. 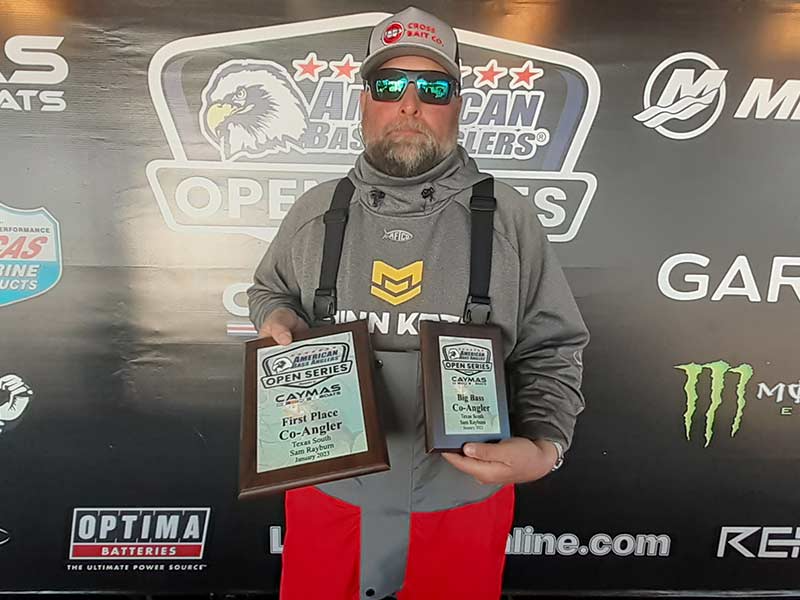 “All of my fish came on a Rat-L-Trap,” Easley revealed. “I fished grass, but where a deep spot would go up shallow. They seemed to be sitting right there. I caught my first and biggest fish at 7:30 a.m. I had a limit by 9 a.m. I caught 10 keepers and culled a couple times.”

Tacorrie Johnson of Royce City finished in second place among the co-anglers. He found three keepers for 6.96 pounds. That gave him $550 in winnings.

“I worked a Carolina rig all day in about 10 feet of water,” Johnson said. “I tipped it with a Zoom soft-plastic bait. I caught my first fish at about 8:30 a.m. and had my limit by 1 p.m. We found a little spot close to the ramp and culled three fish.”

Taking the third spot for the co-anglers, Gary H. Medley from Vidor brought in three keepers for 6.55 pounds. He earned $350 for the catch.

Charlie L. Watts of the hosting town of Zavalla landed three bass going 6.41 pounds to pick up $275. Capping off the top five co-anglers, Elton D. Brock from Marshall put three keepers on the scale for 6.14 pounds to collect $200.

The division returns to Lake Sam Rayburn on March 11, 2023, for the second season event. Again, the anglers will run out of Cassels-Boykin State Park, located at 500 Cassell Boykin State Road in Zavalla. To register for this event, CLICK HERE.

Each ABA Open Series division offers four one-day qualifying events in a boater/co-angler format. Boaters pay an entry fee of $210 for each event while co-anglers pay $105. The top 20 percent of registered anglers in each tournament will receive cash payouts based on the total number of entries. If at least 60 boaters enter the tournament, the Boater Division winner will receive a minimum of $5,000.

In addition, anglers could qualify for bonus money offered by such tournament sponsors as Caymas Boats, Mercury Marine, the T-H Marine Atlas Awards program and Power Pole. Anyone who qualifies for Caymas Cash rewards could receive up to $7,000 for winning any ABA Open Series event. If the winning boat carries a Mercury motor, the angler could receive an extra $1,000 in cash from Mercury Marine. See each manufacturer’s website for details, rules, and qualifications for more information on their contingency programs.